EarthTalk – How will climate change impact trees in the United States?

How will global warming change the distribution of trees across the continental U.S.? Which types of trees and forests are most at risk?

It's true that climate change is already affecting tree distribution and forest cover in the United States (as well as everywhere), but only time will tell which tree species are most successful at adapting and whether we will lose significant amounts of forest cover overall.

"A walk in the woods or a stroll on a tree-lined street could be a very different experience just a few decades from now," says U.S. Forest Service researcher Stephanie Worley Firley. "Higher temperatures, altered precipitation patterns, and longer growing seasons predicted for the future could require that some tree species will have to move--or be moved--into new areas where habitat will be more suitable." She adds that some tree species may be able to stay in place by adapting to new conditions, but many others are unlikely to be able to adapt and "may succumb to the pressures of climate change." 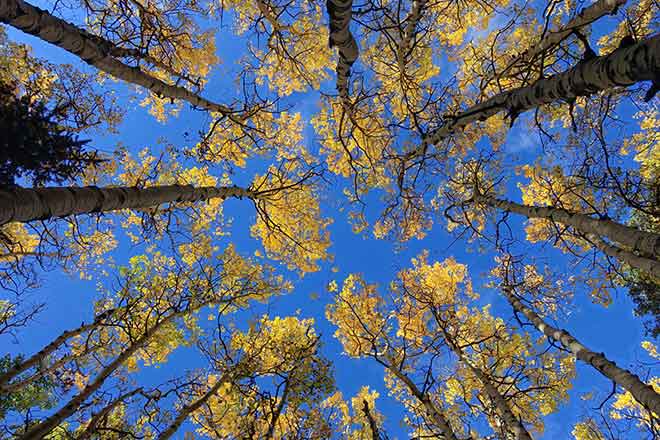 One example of an iconic tree species that is already suffering from the effects of climate change is the Quaking Aspen, the most widely distributed tree species in North America. To day the tree is still common in higher elevation regions of Colorado and Utah as well as throughout the rest of the American West, but that might change in the coming decades. Researchers have been tracking the decline of aspens in Colorado for at least 20 years at the hands of climate change and related stressors. Given their shallow root systems, aspens are particularly sensitive to drought; warmer, drier weather overall as a result of global warming means more drought and more trouble for the trees moving forward. Researchers worry that aspens may be gone from the southern (and driest) band of its range within decades, and foresee drastic declines in the tree's overall distribution as temperatures inch up, drought pervades and forest fires rage throughout the region.

Another iconic tree that has already been hit hard by global warming is the Sugar maple, famous as the source of Vermont maple syrup. Warmer winters have already shortened the syrup "tapping" season by more than 10% and if the trend continues there won't be enough winter to sustain the $200 million/year Vermont maple syrup industry. Some other tree species on the ropes thanks to climate change include Balsam fir, Black ash, Paper birch, White pine, Tamarack and Red spruce.

Researchers from the North Carolina-based Eastern Forest Environmental Threat Assessment Center are using forest inventory and analysis data from the U.S. Forest Service to compare where tree species occur presently with a wider range of where they could move or expand given rising temperatures and other changing landscape conditions. By looking at how landscape, weather and temperature conditions will change over the next three decades based on a conservative model of climate change, the researchers can start to project where the most suitable conditions for different types of trees might occur across the country by 2050. This kind of knowledge can help land managers prepare for the changes coming and can help planners map out forward-looking, climate-friendly zoning patterns.

Poll: 63 percent of Americans say they are...