EarthTalk – What are the ramifications of fires in the Amazon Rainforest?

What are the ramifications of these horrendous fires taking place now in the Amazon Rainforest? What can be done to stop the madness?

Fire isn't new to the Amazon rainforest of South America, but it has certainly reached epic proportions this year. Some 26,000 different fires are now burning continuously throughout the region. Many of these blazes have been set intentionally by ranchers and farmers trying to (illegally) clear and use more and more land for raising cattle and crops.

These so-called "slash-and-burn" tactics reduce wildlife habitat and biodiversity accordingly while releasing massive amounts of carbon dioxide into the atmosphere, only adding to our climate woes. Meanwhile, indigenous groups who depend on the rainforest for subsistence teeter on the brink of survival in the face of shrinking habitat. 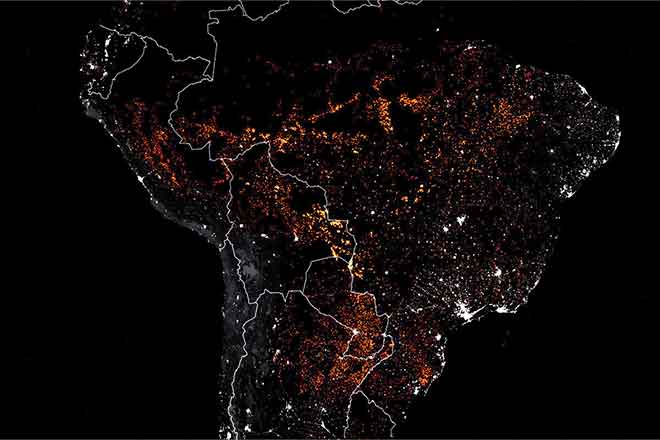 Unfortunately, putting out most of these existing fires isn't feasible; they'll have to run their course. Environmentalists agree what we can do is prevent more land from burning in the future as one way of protecting the intact tropical rainforest that remains throughout the Amazon.

But how? For starters, by working on the ground in partnership with local indigenous communities on making their forests sustainable through tourism and responsible use without resorting to clearing/burning the land. One of the leaders in this new breed of rainforest activism is Niyanta Spelman and her group Rainforest Partnership, which currently has four different projects underway with the Achuar, Chipaota and Colibri indigenous communities of Peru and the Sani Isla community of Ecuador.

"When managed sustainably, ecotourism in the rainforest can help protect biodiverse ecosystems, provide reliable income to forest communities, and educate travelers about the importance of conservation," says Spelman, who launched Rainforest Partnership in 2007 and has built it into one of the most impactful groups working in the region.

Meanwhile, other groups are focusing on converting farmers and ranchers over to more sustainable crops and practices. "Although the fires were set to clear space to occupy the land, a lot of the area is not used productively or is used mainly for land speculation," reports the Nature Conservancy, another leading non-profit working on the ground in the Amazon and elsewhere to protect tropical rainforests. "There is already a considerable amount of land in the Amazon to increase production of food without deforestation." The Nature Conservancy sees smarter use of land across the Amazon that's already been converted to agriculture as one key way to stem the tide of rainforest loss and ultimately global warming.

As for what people can do, being more thoughtful about the foods we eat is a big step in the right direction. That hamburger meat you are eating might well come from cattle on a burned-over pasture in a former slice of the Amazon rainforest. That'll give you pause when you are thinking about what to put in the shopping cart at the grocery store and what to order off of a restaurant menu. The shocking truth is that 80 percent of tropical rainforest destruction across the Amazon is fueled by beef production. So eating a more plant-based diet is a great way to help protect what's left of the world's tropical rainforests.