EarthTalk – What states are being impacted by Emerald Ash borers?

Where I live in Southeast Michigan, an invasive insect called the Emerald Ash Borer is wreaking havoc on our forests. Are other parts of the country dealing with this pest or others that are killing large numbers of trees?

In a growing number of U.S. states, residents have been dealing with a different kind of quarantine that began back in the early 2000's and continues on today. But this one involves wood, not people, and the perpetrator is a beetle, not a virus. 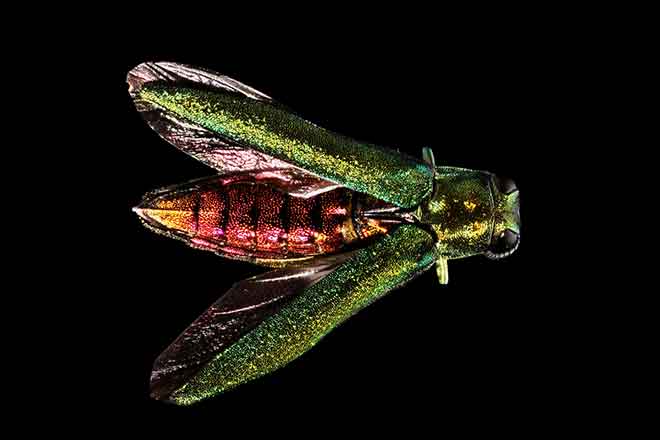 The Emerald Ash Borer hitched a ride on wood from Asia decades ago and has decimated ash forests in 35 states and five Canadian provinces. Credit: B Smith, FlickrCC.

The problem started in 2002 when the Emerald ash borer, an exotic green beetle that probably hitched a ride to the U.S. with wood materials from Asia, began decimating ash forests in Michigan. Since then, this little invader has killed hundreds of millions of ash trees across 35 U.S. states and five Canadian provinces. Ecosystems where these ash trees play a pivotal role are decimated, while forest products industries and property owners in these areas are also worse off. And wood coming out of affected regions is being quarantined to make sure it isn't harboring the invasive pest before being shipped out to other parts of the country or world.

A new Asian gypsy moth strain is another emerging threat to U.S. coastal forests. The U.S. Department of Agriculture (USDA) warns, "If established in the United States, Asian gypsy moths could cause serious, widespread damage to our country's landscape and natural resources." In May 2020, Washington governor Jay Inslee issued an emergency order in response to the infestation. These moths have wrought havoc before, and scientists have offset infestations using a special kind of moss on different East Coast strains. Hopefully similar measures are that a measure can counteract impacts on the West coast soon as well.

There are many factors driving the spread and growth of harmful species to trees in North America. Clothing imported from China, wood brought from Canada, sugar transported from Brazil, and much else of what we consume here that comes from abroad brings with it the transport of species, whether on purpose or by accident, with potentially catastrophic effects.

Climate change is also a factor. Insects live in specific environments based on weather, and their ranges expand and breeding seasons increase as global temperatures rise. Mountain pine beetle numbers, for example, have grown rapidly in recent decades due to the warming climate. Cold winters that usually drive beetles to hibernate, protecting pine forests for a spell, are growing shorter. Beetles can now complete two reproductive cycles in the expanded warm seasons, leading to increased tree mortality in affected regions. If warming continues at the current rate, trees won't be able to adapt fast enough to survive.

There's not much individuals can do to prevent the spread of invasive tree pests except by buying wood products produced by local logging operations or wood lots. Likewise, procure firewood from local sources, as many pests hitchhike into new terrain on firewood in back of the family station wagon.