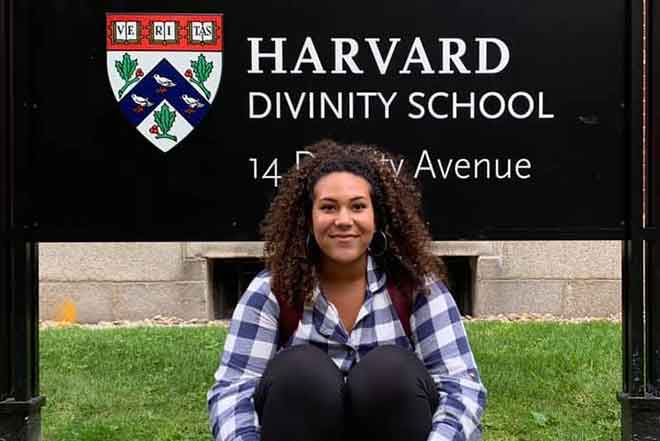 Editor's note: Eboni Nash is a graduate of Eads High School and Hastings College in Nebraska, where she majored in psychology, religion and sociology. She now attends Harvard University in Massachusetts. Eboni writes periodically for the Kiowa County Press.

A little spoken word I wrote for the 2020 Black Religion, Spirituality, Culture Conference.

I was swiping through this dating app, looking for my next step in life. Feeling lonely and lustful. You see, my ex dumped me after he heard about my FAFSA running out, he told me it wasn't working, handed me a measly piece of paper and told me to get gone. The last I heard from him he was asking me for money, like I didn't already give him enough! So, I left him on read.

There I was on this dating app right, looking for something new, something to kick off my extravagant twenties. Then I saw him. A tall man white man, not really my type, but claims he doesn't "see color." A little old, but hey I dig it. He is cited by millions, followed by thousands, and considered quite the catch in academia. Swiped right and it was a match. He wanted me as much as I wanted him. Havard was his name.

Things started off great, he promised me money and success if I came to live with him. He told me he would show me the ropes if I took the chance and invested in him. Finally, my sugar daddy, the one to fix everything. He complimented me on my voice, the confidence on my tongue. My pronunciation and poise. He told me that I have exactly what he is looking for. And with him, he could make me a winner. So, I went. I moved in with him, full faith hanging on by the social profile I had SUBMITTED to him. I had ....submitted to him. A black girl, looking for answers, and all I could give him was the porcelain-stained lies that littered my throat. My white voice. The passing verbiage used to seem employable, desirable, and worthy within his eyesight.

He knew of all my travels, the states that knew my name and paid homage to my footsteps. But he didn't know the loans I had to take out to afford it. The multiple cosigners behind me to get me here, none of which are in MY FAMILY.

He knew about my scholarships, the honorary and leadership, the awards that gave hype to my name. But he didn't know about all the fake smiles, insincere laughs, and rehearsals of my poker face that had to come about for allllll thattt to happen. He didn't know about the white men I had to face to get to the level of leadership I am today, how many microaggressions I had to choke on to finally be able to breathe again.

But he knows about my research, my passion in the prison system. He calls it a charitable act. But what he doesn't know is how the real act is me ACTING like everything is alright. Acting as if my own trauma is not a catalyst for my passion for JUSTICE. Acting as if the objective of this project is not to cut strange fruit from our family tree and feed it to the so-called blind Christians that litter his DM's.

How could I tell him this? Should I call Neve and expose us both for what we aren't? I have invested so much into him, money, time, and my future dreams. Besides, it is my fault that I presented myself as somebody I am not. Somebody he might actually admire; I mean it sounds alright. White passing in white spaces. White spaces. The place that seems to be a whole lot of nothing, but they try and tell us it's something. Something we can't get, something we can't buy, but it is something they sure as hell won't let us forget. But it is him who is draining me. It is him who feeds me with the colonized spoon, and all of a sudden, I'm not hungry anymore.

So, I grab his cold wrist, raise it above my head, and let him feel the kink to my curls. I let him smell the coconut oil that fills the cracks to my broken body. I left him speechless. Gnawing on the idea that the woman he thought I was, was the result of that sweet talk that capitalism beat into me as a kid, they call it SURVIVAL. I was not a poster child but a projects child. Mixed, double dutching the line of oppressed and oppressor. You get your hype from exclusion, but baby, I got you now. Black and educated. Black and excelling. Black and calling you on your B******t.