Portions of the country will hop aboard a wild weather ride over the next few days. A week that started out with a spring tease and record-breaking temperatures for some areas over the central United States, will soon feature a reality check as a series of moderate storms will trim temperatures -- and bring some weather risks along with them.

Confidence is growing among AccuWeather's expert team of meteorologists for an even bigger and more potent storm that will take aim from the Rockies to the Plains by the weekend. Not only could the weekend storm drop very heavy snowfall amounts, but it could also unleash the potential for severe weather and flooding rain.

The storm that has been on AccuWeather's watchful eye since early last week is actually a large southward dip in the jet stream that is expected to become a closed low-pressure area, which is essentially a storm located high in the atmosphere. 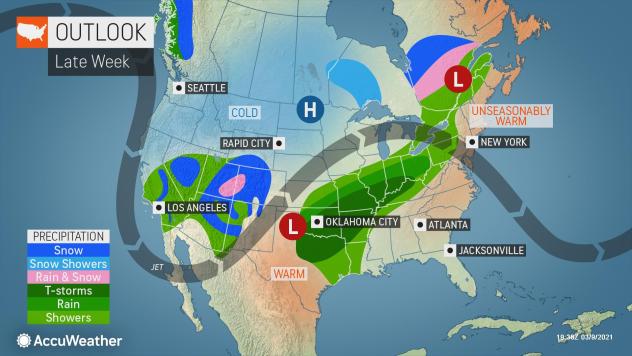 The storm is forecast to push inland Southwest states at midweek then spin eastward. Because storms of this nature are thoroughly involved at the jet stream level, they often bring extreme weather in the lower part of the atmosphere.

The developing and strengthening storm is forecast to unleash up to a couple of feet of snow on the Sierra Nevada and needed rainfall at lower elevations of California and Nevada into Thursday.

On the storm's wintry side, a multiple-day snowfall is expected over some of the mountains over the interior West, including the Colorado Rockies and foothills as well as adjacent areas of the central High Plains beginning late this week. 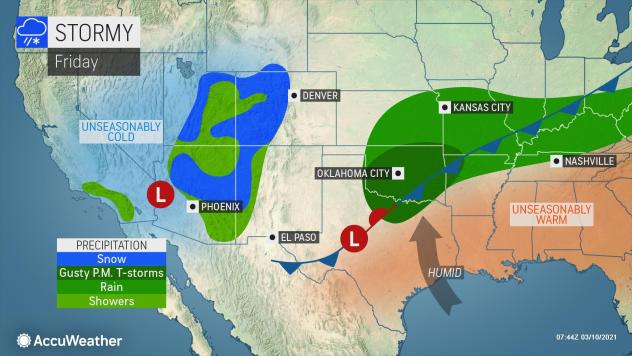 "From Friday to Sunday, the slow-moving, upper-level storm has the potential to unload several feet of snow along the Front Range and eastern slopes of the Rockies and foothills in Colorado," AccuWeather Senior Meteorologist Mike Doll said.

There is the potential for 3-6 feet of snow and perhaps locally higher amounts, should the storm track just to the south and allow moisture to ascend thousands of feet from the Plains to the ridges and peaks of the Colorado Rockies.

Denver is shaping up to be buried by 1-2 feet of snow, AccuWeather forecasters warn. 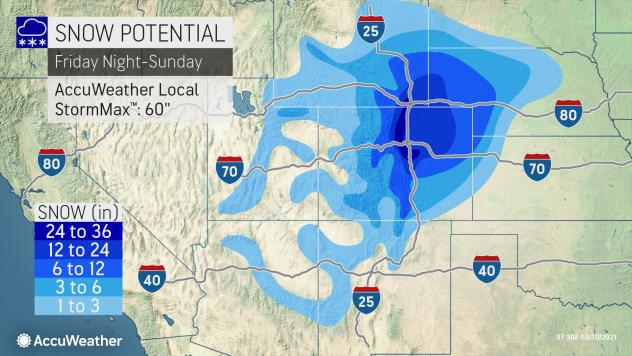 "Even though the first part of the storm may bring intermittent snow from Friday to Friday night in Denver, the worst of the storm in terms of heavy snowfall rates is likely to be from Saturday to Saturday night," AccuWeather Senior Storm Warning Meteorologist Brian Wimer said.

Snow may fall at the rate of 1-2 inches per hours at the peak of the storm in the Mile High City. Snow is expected to continue into Sunday and Sunday night with intermittent snow still possible on Monday.

"This is a favored time of the year, as is the autumn, for big storms in Colorado," Doll said.

That trend to larger systems this time of the year occurs as cross-country storms remain strong and the track begins to shift northward from the southern tier of the U.S. during the middle of the winter once again -- and Colorado can fall in the crosshairs. The setup results in bookend snowfall for Colorado and the Denver area, where a big percentage of snow piles up at the start and end of the winter, as opposed to smack in the middle.

For example, the average snowfall for February in Denver is 5.8 inches as opposed to nearly double the amount, or 10.7 inches, for March. 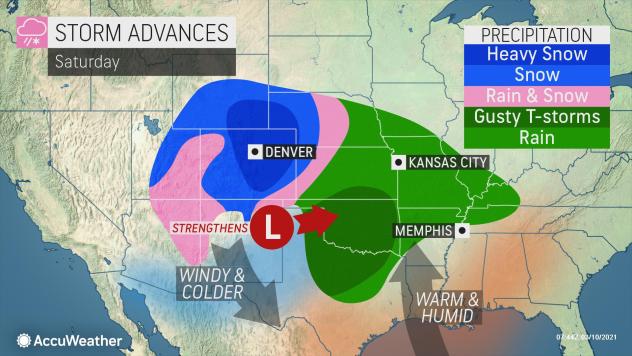 The 31.8 inches of snow that fell on Denver in March 2003 was the city's second-biggest storm on record, according to the National Weather Service. The storm on Dec. 1-5, 1913, ranks as the biggest, when 45.7 inches of snow accumulated. As disruptive as the 2003 storm was to travel, it put a major dent in a drought that was affecting the region at the time.

Just like in 2003, this same storm can be very beneficial in boosting snow levels in the mountains and rain in lower elevations as soil conditions range from abnormally dry to that of exceptional drought in Colorado and much of the West, according to the latest report from the United States Drought Monitor.

In addition to the likelihood of heavy snow in Colorado, substantial snow will also be possible in portions of Nebraska and Kansas, as well as southern Wyoming.

Even as the storm pivots northeastward beyond this weekend, moisture may join up with a storm expected to roll into the Northwestern states.

"There is the potential for areas of heavy snow to break out over portions of Montana, Wyoming and Idaho as the old storm and the new storm nearly merge early next week," AccuWeather Senior Storm Warning Meteorologist Eddie Walker said.

This fill of moisture could bring some much-needed precipitation to the northern tier of the Plains and Rockies, where soil conditions range from abnormally dry to severe drought.