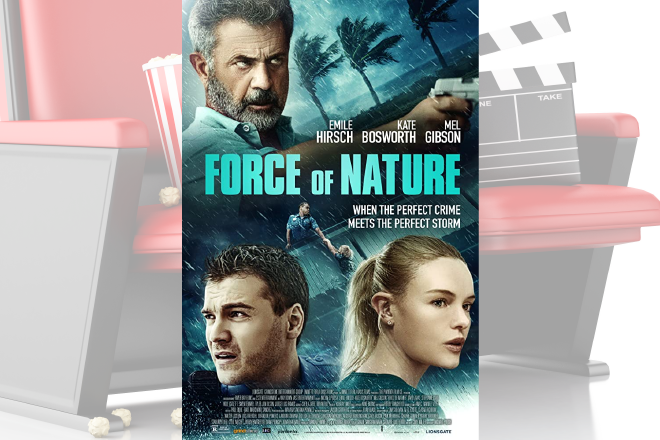 I could tell "Force of Nature" was a bomb based on the casting alone. The biggest name attached to this movie is Mel Gibson, whose prolific history of public meltdowns makes him an albatross to any project carrying his name. But he still has his fans from "Lethal Weapon" and "Braveheart," and he even directed "Hacksaw Ridge" to a Best Picture Oscar nomination four years ago. So maybe there's still "some" room in Hollywood for him. Then there's Emile Hirsch, who in 2015 was charged and convicted of assaulting a female studio executive. The guy should not have a career anymore. I guess somebody connected to this movie thought Hirsch had enough clout leftover from "Speed Racer" and "Into the Wild" that his name could be a boon to this film. And if you're thinking, "enough with the actors' personal lives, how are they in the vacuum of this movie?" they're terrible. Gibson lazily relies on "grouchy" affectations and Hirsch is awkward and unconvincing as a cop. These roles could easily have been played by non-trainwreck actors, probably to better effect, though it's not like better actors would be able to save this dismal material.

The film is a "Die Hard" knockoff where our heroes are trapped in an apartment building during both a hurricane and an invasion of violent thieves led by a man called John the Baptist (David Zayas). Cops Cardillo (Hirsch) and Pena (Stephanie Cayo) are called to evacuate the building, only to find out that some of the residents don't want to leave. Former cop Ray (Gibson) doesn't want to leave because he knows his doctor daughter Troy (Kate Bosworth) wants to take him to the hospital for a humiliating medical procedure. Elderly German Bergkamp (Jorge Luis Ramos) wants to protect the paintings that John the Baptist wants to steal. Distrustful-of-cops Griffin (Will Catlett) is willing to evacuate, but only after he feeds a hundred pounds of supermarket meat to his mysterious pet. The film is clearly building to a scene where the pet attacks the bad guys - Chekov's gun and all that.

The action is exactly what you'd expect from a crummy On Demand movie - rainy shootouts, shaky fistfights, and bad guys who always give up the element of surprise. Since the action doesn't start up for a while, we get that overdone trope where the film opens in the middle of a random action scene and then cuts to a few hours earlier. No doubt the film wants us in suspense over who survives the opening fight: main character Cardillo or a henchman who's like the fourth guy from the top.

The drama is even worse than the action. Cardillo is haunted by a fatal mistake from his past. Other characters tell him that it wasn't his fault, but it totally was, though the victim and a third party were idiots too. There's somehow time for a relationship between Cardillo and Troy, which is not only ridiculous and far-fetched, but I think the movie should have made Pena the love interest for Cardillo instead. The way she pushes him in an opening scene is something he needs in his life. Also, the film throws in some mentions of racial profiling and the Holocaust, as if checking these items off a "wokeness list" will automatically make the film deeper.

The ending of "Force of Nature" is annoyingly abrupt, but I suppose it's a blessing in disguise if it means I have to spend less time with this awful movie. Nothing about this movie is original (save for the pet) or even likeable (save for Cayo). This movie never should have been made, and the fact that it was made means that some deplorable people earned paychecks, so there's that depressing thought on top of everything else.

"Force of Nature" is available On Demand through streaming services and likely through your local cable provider. The film is rated R for violence and pervasive language. Its running time is thankfully only 91 minutes.