I never saw the 2004 version of "The Grudge" or the 2002 Japanese horror film that served as its basis. I didn't even watch either film for research before seeing this new film. I figured that if this film was going the remake route, it might hurt to know when the scares were coming. Similar research tainted my enjoyment of last year's remake of "Pet Sematary," as I waited with waning interest for John Lithgow to descend that staircase. It turns out I was worried about nothing, for two reasons. The first is that this is a sequel, not a remake, so the scares as far as I can tell are not direct repeats. The second is that the scares in this movie would be ineffective regardless of spoilers. 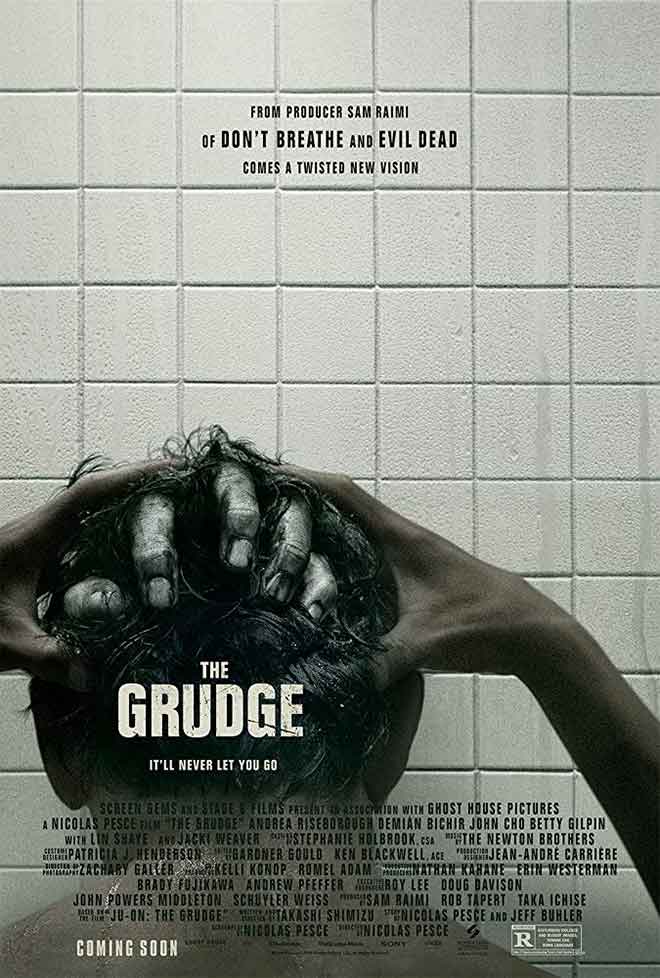 The film opens in 2004 with live-in nurse Fiona Landers (Tara Westwood) leaving a creepy house in Japan and returning home to her family in America. But it's too late, she's already infected with the Grudge curse, which apparently causes people to murder their loved ones, and things aren't going to end well for her and her family. Cut to present day, where Detective Muldoon (Andrea Riseborough) and her son are starting over in a new town (the son's line, "Daddy and I never finished [this art project]" tells you all you need to know). Muldoon's first day on the job sees her and her partner Detective Goodman (Demian Bichir) investigate a mysterious death, which is linked to the Landers house. Goodman refuses to investigate anything having to do with the house, but Muldoon is suspicious and curious. She pries into the house's history and doesn't like what she finds.

The film spends quality time filling us in on some incidents in the time since the Landers family. It's just as well because these segments are actually quite compelling compared to the minimal Landers story and the hackneyed Muldoon one. John Cho and Betty Gilpin play a pair of married real estate agents tasked with selling the house. They're about to have a baby, but the baby is predisposed to a disease, and they're not sure if they should keep it. It's a well-written, well-acted storyline, but this being the movie that it is, everything they're discussing is probably going to be moot very soon. Frankie Faison and Lin Shaye play an elderly couple who move into the house specifically because it's haunted, which the husband interprets as meaning life after death for the wife, who is sick in more ways than one. He tries to hire an assisted suicide specialist (Jacki Weaver) to expediate the process, but the wife is too wrapped up in talking to ghosts to be ruled mentally competent to kill herself, which isn't to say she isn't capable of killing. In addition to ghosts, the house is also haunted by Goodman's ex-partner (William Sadler), who is obsessed with the curse, but not to the point where he tries to do anything useful like destroy it or warn people about it.

The flashback storylines carry more dignity than "The Grudge" deserves, but at the end of the day this is just a silly horror movie where characters creep around houses investigating strange noises until a ghost jumps out and screams at them. These beings have mastered the ability to cross planes of existence, and they use this miraculous power to give well-meaning people jump scares. Come to think of it, there's no reason for the ghosts to exist at all, it's the regular people carrying the curse who are doing all the gratuitously violent work. I know the movie needs the ghosts to sell tickets, but would it kill them (again) to have more purpose?

"The Grudge" is rated R for disturbing violence and bloody images, terror and some language. Its running time is 93 minutes.

Why food insecurity among Gen Z is so much...

South Dakota residents have until August 15...