There's a pop culture entity that can be seen right now that features foulmouthed puppets doing risque things and is an absolute blast for anyone mature enough to handle it. I'm speaking, of course, about "Avenue Q", the Tony-winning musical of consistent popularity that has been playing in New York since 2003. There's also a new movie called "The Happytime Murders" that features foulmouthed puppets doing risque things. It's an absolute bore for both the mature and the immature; mature people will think it isn't funny, and even immature people who initially think it's funny are sure to notice that the film is completely out of steam by the end.

The film takes place in an alternate version of L.A. where human live alongside puppets, but puppets are treated like second-class citizens. Nowhere are puppets more poorly represented than in the LAPD, who have only ever hired (and fired) one puppet officer. Phil Philips (Bill Berretta) was a pioneering police puppet until a botched gunshot left an innocent father dead and his partner Connie (Melissa McCarthy) in need of an urgent liver transplant... which she got from a drug-addicted puppet, making her an addict herself. Now Phil lives the life of a seedy private detective, and not even his beautiful human secretary Bubbles (Maya Rudolph) or new femme fatale client Sandra (Dorien Davies) can cheer him up. 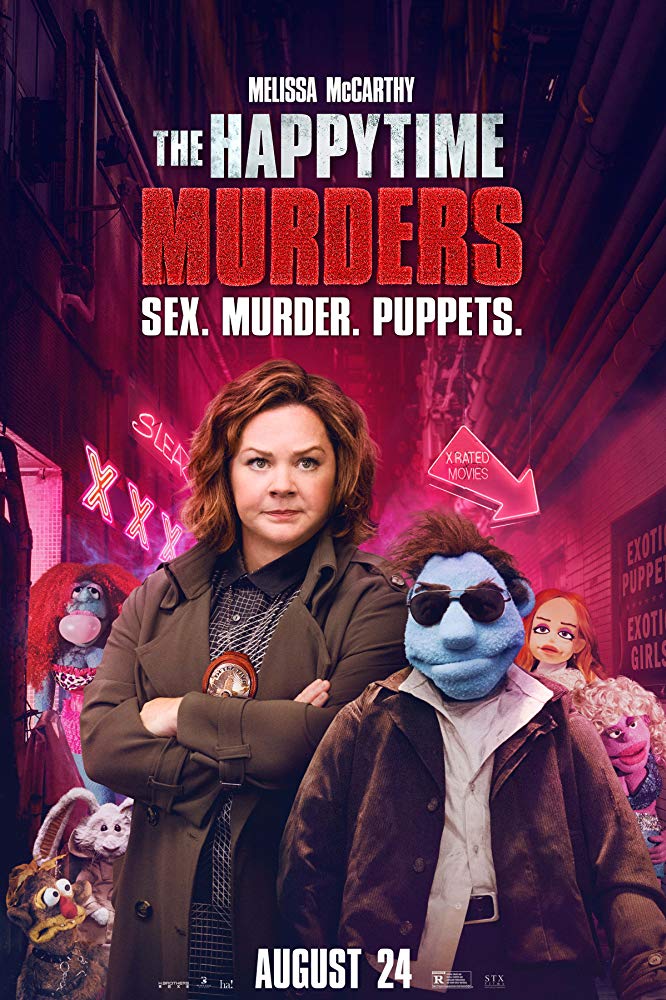 While investigating the case for Sandra, Phil stumbles across the murder of a former cast member of the beloved puppet sitcom "The Happytime Gang." This piques Phil's interest because his brother Larry (Victor Yerrid) was a cast member on the same show, as was his human ex-girlfriend Jenny (Elizabeth Banks). Soon another cast member from the show is dead, and then another. Someone is going after The Happytime Gang, and they won't stop until either the whole gang is dead or, if they're a member themselves, they're the last one left standing. Connie is the detective assigned to investigate the murders, and Phil is temporarily brought on as her partner. The two don't get along, but together they navigate a plot of sex, drugs, violence, and stuffing in the name of justice.

Among the movie's mistakes is that it focuses too much on Phil and Connie. Phil is your standard jaded ex-cop and Connie is yet another rambling Melissa McCarthy performance in desperate need of trimming. There's a whisper of potential with supporting characters like Larry, who has maintained his celebrity by assimilating into human culture, going so far as to get plastic surgery to make certain puppet-y body parts appear more human-like. I wouldn't mind spending more time learning what makes the puppet sellout tick. Also, since it seems that the murders are coming from inside the Happytime Gang (due to a splitting of syndication royalties), it would be appropriate to make the various members look like suspects instead of inevitable victims.

There's not much I can say about "The Happytime Murders" other than that it's just not funny. The movie relies to the very presence of crude puppets for laughs, never minding that their shock value wears off quickly, especially if you've seen the uncensored online advertisements. Occasionally the film will get a laugh with some physical humor (my favorite gag involves a drowning victim), but then it will go right back to having little to offer besides swearing and drug talk. The film ends with behind-the-scenes footage of the cast and crew laughing as they play with the puppets, which tells me that the whole project was just an excuse for them to get paid to screw around instead of telling a story that was worth telling. Too bad the fun they're having doesn't translate to infectious laughter in this dismal waste of a movie. The whole thing makes for an unhappy time.

"The Happytime Murders" is rated R for strong crude and sexual content and language throughout, and some drug material. Its running time is 91 minutes.