NOTE: Theaters in many areas have been ordered to close in light of the ongoing COVID-19 coronavirus pandemic. Check with local theaters for updated operating procedures. Exercise caution and practice cleanliness and safety if you plan to see any movie theatrically in the current climate. Some studios are beginning to offer online options to see the latest releases.

"Believe" it or not, the PG-rated, Christianity-infused drama "I Still Believe" reminds me a lot of "Funny People," an R-rated Judd Apatow comedy from 2009. Both films are overlong (or at least seem that way) and feature an emotional, heartfelt storyline about a character's struggle with cancer as well as an off-putting storyline about a romantic relationship where both partners become unlikeable because of their shared dishonesty toward a third party. The difference is that in "Funny People," the relationship portion comes after the sickness portion and undermines the connection the characters have made with their audience. In "I Still Believe," the relationship portion comes first, so the connection with the audience is murky when the heavier subject matter comes in and we need to be heavily invested in these characters.

The film tells the true story of Jeremy Camp (K.J. Apa), who goes off to college and makes fast friends with popular Christian musician Jean-Luc (Nathan Parsons). He also takes notice of audience member Melissa (Britt Robertson) and falls madly in love with her... before he knows anything about her. I know there's a romanticism surrounding the concept of "love at first sight," but especially presented the way it is here, I think it's creepy to fall in love based solely on physical attractiveness. He approaches her a few times and she eventually warms to him... even though she doesn't know anything about him, either. Well, except that he's interested in her, but that's hardly a healthy foundation for a relationship. Obviously these two are going to fall in love with each other's personalities eventually, but all they have in common initially is an equal sort of shallowness. 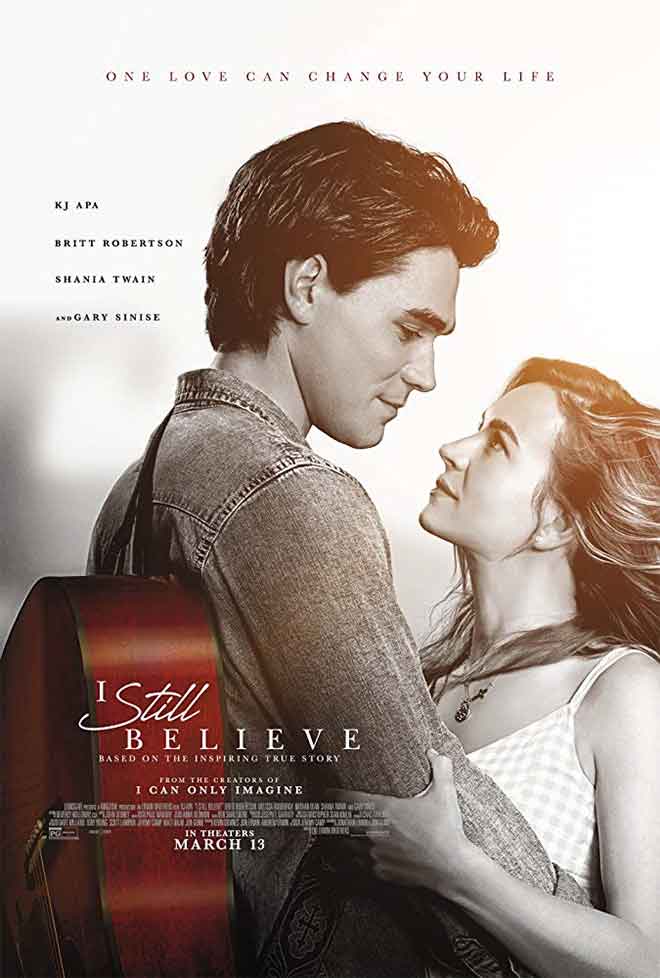 Jeremy and Melissa fall in love, but there's a complication: Melissa isn't comfortable being in a romantic relationship with Jeremy because she might already be in one with Jean-Luc. "Might" isn't just slippery language in this case, even she doesn't know if their relationship is romantic or plutonic. But whatever it is, it's enough to make her not want to disclose her relationship with Jeremy to Jean-Luc. And she insists that Jeremy not disclose it either, which puts them both in the position of feeling pressure to be dishonest. They never choose to make the right decision either, but the whole conflict is unceremoniously brushed aside once Melissa is diagnosed with cancer.

The rest of the movie is exactly what you'd expect from a romance where one of the partners is suffering from a life-threatening illness. Jeremy and Melissa care for each other, inspire each other, are strong for each other, in short love each other. It's nothing that hasn't been done before (even before genre-definer "The Fault in Our Stars"), but it's heart-wrenching all the same. And the actors really step up their game in these scenes - where was this passion in the early stages of the relationship?

With a title like "I Still Believe," it should come as no surprise that Christianity has a strong presence in this movie. Camp, after all, is a real-life Christian recording artist like Jean-Luc. Many scenes take place at concerts, and when they don't, the movie likes to sneak in little excuses like campfire sing-alongs to feature Christian music. Outside of the music, Melissa talks at length about God's role for her and His presence in her life. Jeremy talks about God surprisingly little, save for a scene where he talks with his minister father (Gary Sinise) about doubts he's having. Spoiler Alert: he comes out of this movie Still Believing. There's an occasionally cheesy but well-meaning, affirming movie here if you aren't turned off by that horrible first third. For me, the movie got its act together a little too late for me to forgive it.

"I Still Believe" is rated PG for thematic material. Its running time is 115 minutes.