Neither the first "John Wick" movie from 2014 nor its 2017 follow-up did enough business to warrant an official review from me. How I wish they had. I could have written about how much fun I had watching Keanu Reeves play the world's greatest assassin amidst a world full of assassins. The second movie in particular had me beaming for hours afterward, trying to whittle down which scene was my favorite before giving up and declaring something like a five-way tie. Now comes a third movie, which I wish we had gotten right after the second. How come "The Matrix" gets two sequels less than six months apart from one another and this vastly superior franchise doesn't? 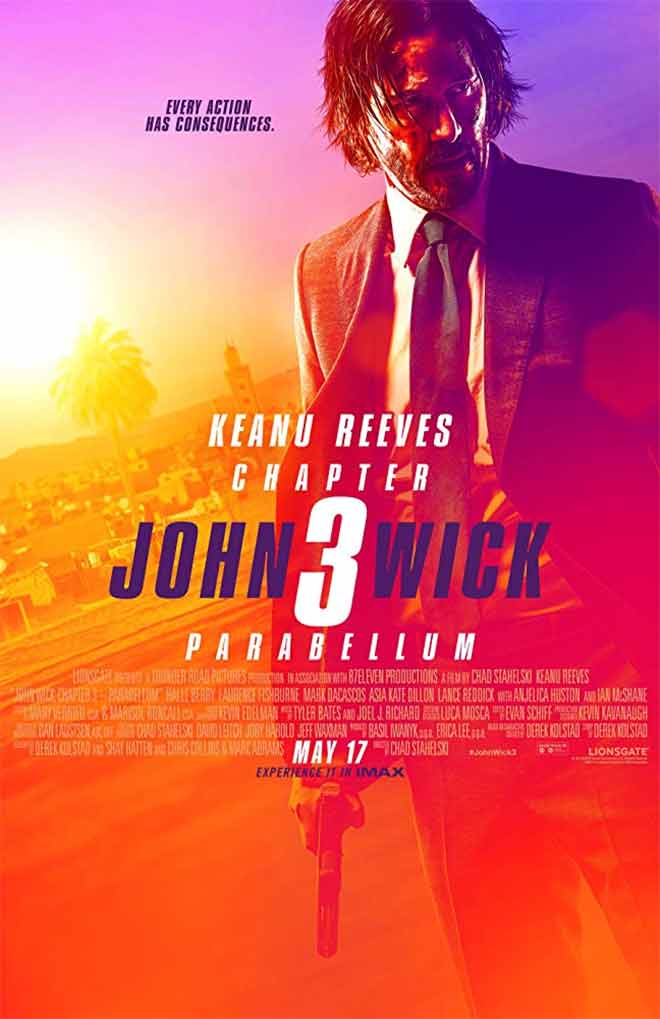 At the end of the second movie, John Wick (Reeves) let his emotions get the better of him and killed an enemy within the consecrated walls of the Continental hotel. The Continental, run by a man named Winston (Ian McShane) and his concierge Charon (Lance Reddick) is supposed to be a safe haven for assassins, and anyone who violates this rule incurs the death penalty. Winston could have killed Wick himself, but opted instead to excommunicate him from his community of assassins, with a $14 million bounty on his life going into effect in one hour.

In "Chapter 3," we see what happens when that hour is up. Several New York-based assassins try to collect the bounty, and Wick has to fend them off without underworld privileges like guns and cars. He has to settle for using a heavy book as a weapon and a horse for transportation (and also a weapon). He makes his way to a Russian ballet Director (Angelica Huston) who can send him to Morocco, where he has an old friend (Halle Berry) who can put him in contact with his world's High Elder so he can beg for his life. Meanwhile, an Adjudicator (Asia Kate Dillon), who works for this world's High Table, is using an assassin of her own (Mark Dacascos) to punish those who helped Wick escape justice, including The Director, underworld crime boss The Bowery King (Laurence Fishburne), and Winston. The High Table is willing to deconsecrate The Continental in order to punish someone whose crime was violating the sanctity of The Continental - how's that for logic?

The high points of the movie are of course the gleeful action sequences where Wick dispatches one would-be killer after another. His favorite method is a gunshot to the head, but he's not above breaking into a knife museum and using whatever he can find in there. The fighting is always crisp with no wasted motion. And it's worth mentioning that Wick and the other assassins are all professionals, and they're excellent about not harming or even bothering innocent bystanders. An early fight scene takes place in a library, and Wick and his attacker don't get shushed once.

"John Wick: Chapter 3" is the usual trigger-happy good time I've come to expect from this franchise. My only real complaint is the ending, where some of the fighting seems rushed (Wick should get more time to fight with two henchmen that I recognize from a certain Indonesian action franchise) and nothing feels resolved. Granted, nobody promised that this installment would represent a resolution, but could this movie be a little less blatant about sequel-baiting? I'm already sold on "Chapter 4" because I like these movies, not because it's implying a series of showdowns that frankly we could have gotten here. On the other hand, what am I complaining about? We're getting more "John Wick" movies and that's a good thing!

"John Wick: Chapter 3 - Parabellum" is rated R for pervasive strong violence, and some language. Its running time is 130 minutes.

Amid restrictions, uncertain fate of Roe,...

Misinformation will be rampant when it...

Search underway for bear after incident...

Home Country – My word is my blonde