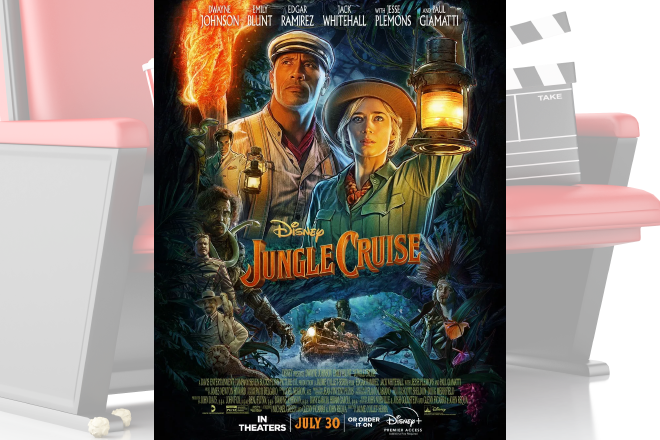 "Jungle Cruise" is the latest effort by Disney to turn one of its legendary theme park attractions into a movie. The gold standard, of course, is "Pirates of the Caribbean," the five-movie franchise that made nearly $1.5 billion at the domestic box office. Less successful were "The Country Bears," "The Haunted Mansion," and "Tomorrowland." The new film is not being released in an era where it can hope to reach "Pirates" numbers, but I have no doubt that it can outperform the other three. My reasoning is simple: those other movies didn't have Dwayne Johnson.

The former Rock is effortlessly charismatic and affable, practically a guarantee of blockbuster box office. He's also usually funny here, save for scenes where he's cracking jokes in the vein of the "Jungle Cruise" ride. I said he was charismatic, not a miracle-worker. The other thing he can't do is come across as someone from 1916, when the movie takes place. He's very "of his time," which is fine because he defines the era. The film pairs him with Emily Blunt, effortlessly charming an affable in her own way, and I'd be happy to watch these two go on a Jungle Cruise without any obstacles. But this is an adventure movie, so there are going to have to be a fair amount of obstacles.

The story sees the headstrong Lily (Blunt) travel to the Amazon with her fussy brother MacGregor (Jack Whitehall) in search of a tree whose leaves can instantly cure any disease. They'll need a boat and a skipper, and they mean to hire the greedy Nilo (Paul Giamatti), but through some colorful conning, they hire the down-on-his luck Frank (Johnson), who needs the siblings' cash. Also after the tree is evil German Prince Joachim (Jesse Plemmons), who believes the tree is the key to winning World War I. He enlists the help of some zombified Spanish conquistadors led by Aguirre (Edgar Ramirez), who could really use the tree to break the curse that's made them something less than human for the past 300 years.

Lily and Frank bicker with one another and occasionally surprise each other. You'll be yelling at the screen for them to just make out already. They encounter jungle-themed dangers like piranhas, hippos, and lots and lots of snakes. They also encounter a hostile tribe of apparent headhunters, though if you've been following the news, you'll know that Disney won't allow them to actually be headhunters in 2021. The story is entirely predictable, save for a twist around the two-thirds mark that the movie can't quite make convincing. If you thought Johnson was out of place in 1916...

I don't have much to add beyond reiterating that "Jungle Cruise" is exactly what you'd expect. Plemmons steals the movie as the villain, who may be going crazy after a few days (weeks?) on a submarine. Johnson gets turned to stone at one point, inviting jokes about his former nickname ("Haven't you heard? He doesn't want to be The Rock anymore. He wants to be Dwayne now.") The tree with the magical petals bears a striking resemblance to the Tree of Life at Disney's Animal Kingdom park, minus all the animal carvings. This movie will probably do well enough to spawn a sequel, and maybe that movie can make "Jungle Cruise" the rightful heir to "Pirates of the Caribbean." Disney doesn't quite have the next "Pirates" here, but at least they're keeping things in Adventureland.

"Jungle Cruise" is playing in theaters and available on Disney+ Premium Access. The film is rated PG-13 for sequences of adventure violence. Its running time is 127 minutes.