Labor Day weekend is notoriously bad for the box office. Not just bad in relation to other holiday weekends, but bad in relation to other weekends, period. Here were the top four movies this past weekend, in order: the third weekend of "Crazy Rich Asians", the fourth weekend of "The Meg", the sixth weekend of "Mission Impossible - Fallout", and then and only then did we get a new release in fourth place with "Operation Finale". And I can see why the film's box office is so small, it's only playing on about 1,800 screens and involves some heavy subject matter, but isn't getting the kind of reviews or buzz that would make it an awards contender. But even though it's not going to be a blockbuster or an Oscar winner, there's an effort being made here that I can definitely appreciate.

Oscar Isaac stars as Peter Malkin, an Israeli spy disgraced after a botched mission where he and his team killed the wrong Nazi. Some members are happy that they at least killed a Nazi, but Malkin shoulders the blame for failing to bring down Adolf Eichmann, the "Architect" of the Final Solution. Years later, a new lead emerges. Eichmann may be living in Argentina. Malkin assembles a team and they get themselves a nice little Argentinean setup with a safehouse and secret identities and so forth. They abduct the suspect (Ben Kingsley) outside his home and get to work trying to confirm that he is indeed Eichmann. The interrogation lasts about half a minute after Eichmann falls for the old "Questioner gets a detail wrong and suspect corrects them, giving themselves away" trap. If we're supposed to take Eichmann seriously as an evil genius, he can't be falling for elementary tricks like that. 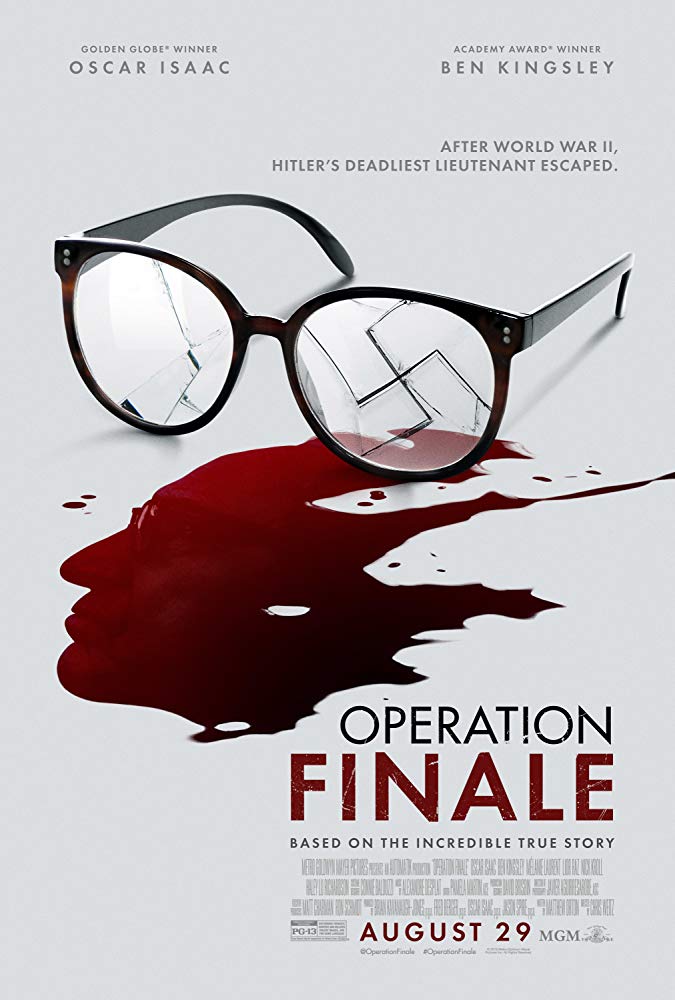 Some members of the team want to kill Eichmann, but officially the mission is to drag him to Israel where he'll get a fair trial and then be killed. A problem with their plane means that the team will have to watch Eichmann for ten days in the safehouse. They'll also have to get him to sign a form agreeing to travel to Israel, not something the Nazi is exactly keen on doing. Not only is it an impossible task, but it seems like an unnecessary one, given that they're planning to fudge his identity for the local authorities anyway. It's a flimsy excuse for Malkin to want something from Eichmann, which sets them up for a series of head games.

Malkin and Eichmann banter, and the agent learns how the Nazi lives with himself, by using justifications like how his role mostly consisted of paperwork and of course, that he was just following orders. Eichmann also learns about Malkin, coaxing personal information out of him just to set him up for an act of extraordinary pettiness later. Eichmann is under no delusion that the team is going to get his signature one way or another, but he's going to have his version of fun making them work for it.

"Operation Finale" can boast two first-rate performances from Isaac and Kingsley. It's also tight and exciting in parts, as it really has the 60's spy stuff (the most stylish era for spy stuff) down pat. But the plot rarely flows the way it's supposed to, as early storylines are forgotten midway through, the identification scene seems rushed, the obstacle with the signature seems contrived, and the ending is reminiscent of the imperfect climax to "Argo" (though this film does it better). Still, this is a decent movie opening at a time that traditionally represents a low point for studio output. It's worth watching, even though few others will choose to do so.

"Operation Finale" is rated PG-13 for disturbing thematic content and related violent images, and for some language. Its running time is 123 minutes.