It has been four years since we've had a Terminator movie with 2015's "Terminator: Genisys." But it has been 28 years since we've had a good Terminator movie with 1991's "Terminator 2: Judgment Day." The series' third, fourth, and fifth installments dragged down the franchise so much that I expected to leave "Terminator: Dark Fate" complaining about a 4:2 bad-to-good ratio with these movies. Instead, I liked the movie, which gives this franchise an even 3:3 ratio, so it's exactly halfway decent. Given the losing streak it's been on for nearly three decades, I'm sure it'll be happy to take "halfway decent." 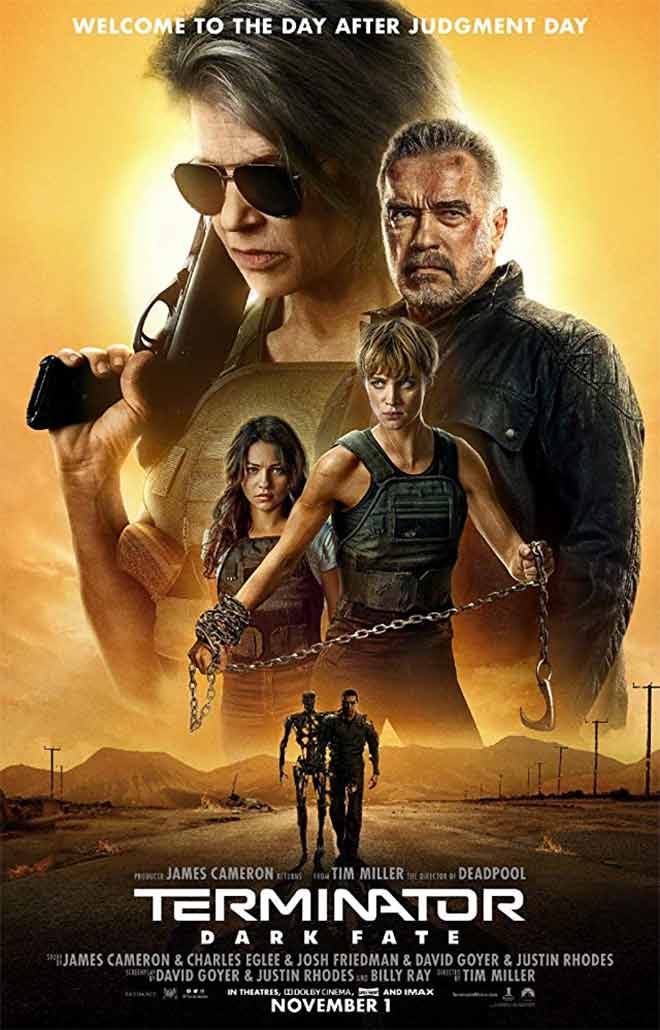 The world of the Terminators is filled with multiple timelines, this one throws out all that came since the second movie, undoubtedly for the best. In this timeline, Sarah Connor (Linda Hamilton) was able to save her future-resistance-leader son John in 1995, but not from a robotic T-800 assassin (franchise face Arnold Schwarzenegger) sent to kill him in 1998. Still, the fateful 1997 robot uprising has been prevented, but another unrelated one might be on its way because humans are just determined to invent robots that will destroy us all.

In 2020, Dani (Natalia Reyes) is having a typically crummy day when she's targeted for termination by the Rev-9 (Diego Boneta), a robotic assassin from the future that can change its appearance with a simple physical contact, yet always reverts back to looking like Diego Boneta for dramatic effect. Dani is rescued by Grace (Mackenzie Davis), a time-traveling "augmented" human with robotic parts. She has about ten seconds to explain her complicated, implausible mission to Dani. Fortunately, Dani has just learned that robot assassins from the future disguised as members of her family are a thing, so plausibility has never been less of an issue with her. It turns out that the Rev-9 can split himself into two distinct killing machines, and Grace and Dani can't fight them both off at once, so in steps the returning Sarah Conner for the save. Following the battle, the two and a half humans go on the run together, until they pick up a fourth member that keeps the count at two and a half humans.

What makes this movie work is that the five leads are just a lot of fun to watch. If (and I mean "if") Dani is going to give birth to the future leader of the human uprising, it won't be hard to see where the kid gets their (non-robotic) iron will. Grace's real attributes are her fearlessness and loyalty, which she'd have even without all her parts and circuits. Sarah is making her third proper appearance in a "Terminator" movie, and this is the third proper "Terminator" movie, which can't be a coincidence. The Rev-9, with his enhanced social interaction feature, makes for a surprisingly charming villainous killer robot. And the T-800 gets to steal a few scenes with some expectedly crowd-popping one-liners and an unexpectedly emotional storyline, including a heart-wrenching turn on a very familiar phrase.

I can't say that the movie surrounding these characters is all that great. There's nothing in the story that "Terminator" fans won't see coming, though the upside is that there's no ridiculous swerve for the sake of a swerve like in "Genisys." There's some heavy-handed support of feminism, criticism of border security, and as always, commentary on how we're already slaves to technology. Even the action is largely forgettable, with lots of obstructive shooting and explosions that are hard to follow and are pretty pointless anyway since the robots can always just fix themselves after getting blown to smithereens. It's the characters on the other ends of all that artillery that make "Terminator: Dark Fate" worth watching.

"Terminator: Dark Fate" is rated R for violence throughout, language and brief nudity. Its running time is 128 minutes.

What is a heat dome?

The Supreme Court has overturned precedent...

Clock ticking down on school meal...