This may be the most boring movie review you ever read. Don't get me wrong, "Toy Story 4" is far from a boring movie. In fact, it packs in so much action that I wondered if it could even reach a satisfactory conclusion in its 100 minute runtime (spoiler alert: of course it did). No, it's boring because I have nothing but compliments for this movie. The most consistently praise-worthy franchise in movie history continues its praise-worthiness, Pixar has done it again, this movie should make history by becoming the first animated movie to win the Best Picture Oscar, blah blah blah. 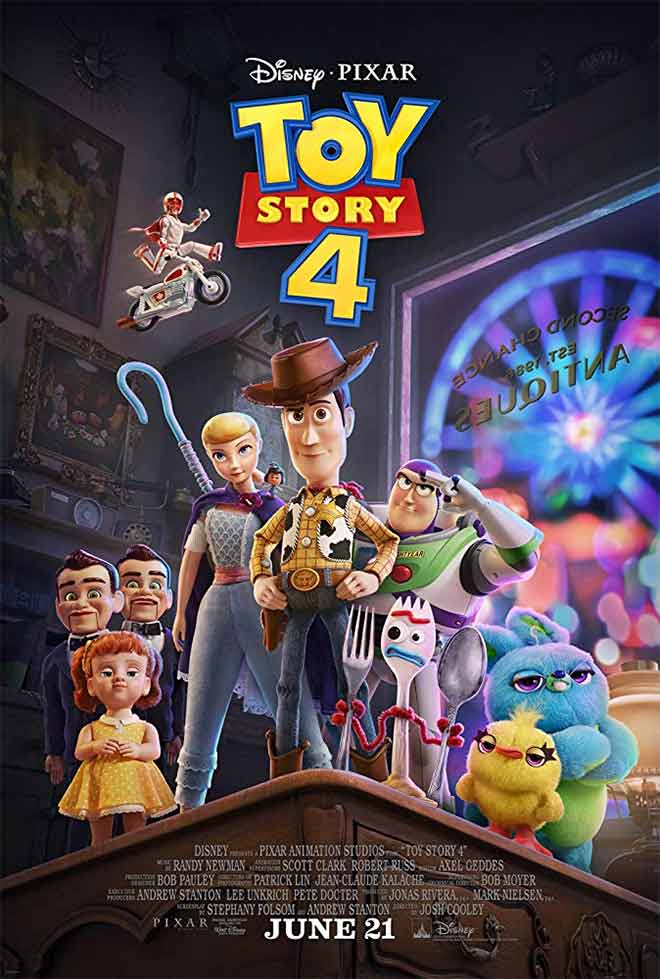 After a prologue where we learn how Woody the cowboy (Tom Hanks) and Bo Peep the shepherdess (Annie Potts) became separated between the second and third movies, we cut to Woody's life post-"Toy Story 3." He enjoyed a comfortable life as the favorite toy of previous owner Andy, with his position only threatened briefly by astronaut Buzz Lightyear (Tim Allen) in the first movie, with the two eventually learning to coexist at the top. But he's nowhere near the top with new owner Bonnie, who seems to only want him for his sheriff's badge, which she can put on Jessie the cowgirl (Joan Cusack). Bonnie is so fickle, in fact, that when she handcrafts a new toy out of items found in the trash, Forky the spork (Tony Hale) becomes her new favorite toy of all.

Bonnie takes Forky, Woody, Buzz, and all the other toys (I won't rattle off the full list, but if they're a series mainstay, they're probably here) on a road trip where Woody constantly has to keep Forky from returning to the trash from whence he came in order to keep Bonnie happy. That's how he maintains his importance, by watching out for the true favorite. Forky, for his part, isn't crazy about living the toy life and just wants to be trash again, not out of a lack of self-preservation, but just because he really likes trash. He attempts escape in small town with a carnival, and Woody pursues him, but notices something in a nearby antiques store. Could it be... Bo Peep? He figures he and Forky can peek inside the store, possibly reconnect with his old friend, and get back to Bonnie before anyone's the wiser. As you can probably imagine, things don't go according to plan.

People are going to come out of this film singing the praises of the new characters. Likely the most popular will be Forky, who gets laughs anytime he moves with his googly eyes and popsicle stick feet. Gabby Gabby (Christina Hendricks) is the de facto villain, a bygone baby doll with a fleet of ventriloquist dummy henchman who wants a voicebox to attract an owner, and decides that Woody's will do. Ducky (Keegan-Michael Key) and Bunny (Jordan Peele) are a conjoined pair of carnival prizes eager to attack humans. Duke Kaboom (Keanu Reeves) is a traumatized Canadian stuntman figure. This movie has the good fortune to be coming out at a time when every entertainment outlet seems to be obsessed with Reeves on a level not seen since the Betty White craze of 2010 (oh, and she's in this movie too!). And Bo Peep has been on the lam(b) (sorry, had to do it) for so long that she's practically a new character herself. She's taken to the life of being a "lost toy," though Woody knows that toys can only be happy if they have a human owner... right?

Kids are going to love "Toy Story 4" because it's funny and engaging and its main characters are toys. Adults are going to love it because it's bittersweet and nostalgic and because Pixar managed to make a fourth movie after three great ones without screwing up the franchise. Who am I kidding, everybody has every reason to love this movie. I recommend seeing it as a family and loving it together.

Should you get a COVID-19 booster shot...

Volunteers at work on Wyoming’s Lemley...

EarthTalk - Why are food manufacturers...

24 states, District of Columbia, have...