Sand Creek Massacre National Historic Site (NHS) hosted 6,847 visitors in 2016, almost one thousand visitors more than the previous year. Visitation to the park has been increasing annually since 2011. 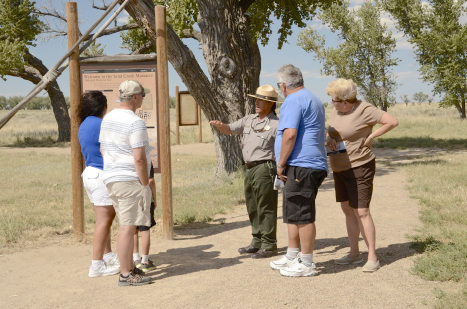 "Undoubtedly the 100th anniversary of the National Park Service increased the public's awareness of their national parks." said Chief of Interpretation Shawn Gillette. "A combination of the Centennial and heightened cultural awareness of the Sand Creek Massacre resulted in an increase in the annual park's visitation."

Across the entire National Park System, visitors logged a record-breaking 331 million visits during the National Park Service's centennial year in 2016, according to official numbers announced today.

"Stunning," Acting National Park Service Director Michael T. Reynolds said of the 2016 count. "We expected more visitors in 2016 as the NPS celebrated its Centennial with special events and activities, but these numbers really show the depth of feeling people have for their national parks, especially considering that increased visitation was recorded not just at the biggest and best known parks but at smaller historical and cultural sites as well."

Visitation growth from 2015 to 2016 was greatest in parks that see more modest annual visitation. "That shows the breadth of support for parks and, I think," Reynolds said, "the Find Your Park/Encuentra Tu Parque  campaign launched with the National Park Foundation reached new audiences but also highlighted what we might call lesser-known parks."

Overall the 2016 Park Service-wide numbers showed a 7.7% increase over 2015.  382 of the 417 parks in the National Park System count visitors and 77 of those parks set a new record for annual recreation visits.