A winter storm is forecast to dive southward across the Rocky Mountains early this week to produce a wide swath of several inches of snow along with teeth-chattering conditions. This storm will likely cause slippery travel conditions in cities such as Denver and reduced visibility across some major highways.

"A stationary front extending southward from southwestern Canada will bring rounds of snow to the northern and central Rockies Monday night into Tuesday night," said AccuWeather Meteorologist Alyssa Smithmyer. A stationary front occurs when the forward motion of a cold front slows and stalls.

The storm will begin diving out of Canada on Monday, bringing snow to places like Calgary, Alberta, before reaching Billings and Missoula, Montana, and Rapid City, South Dakota. After nightfall, the snow is expected to continue traveling southward into places like Casper and Cheyenne, Wyoming. 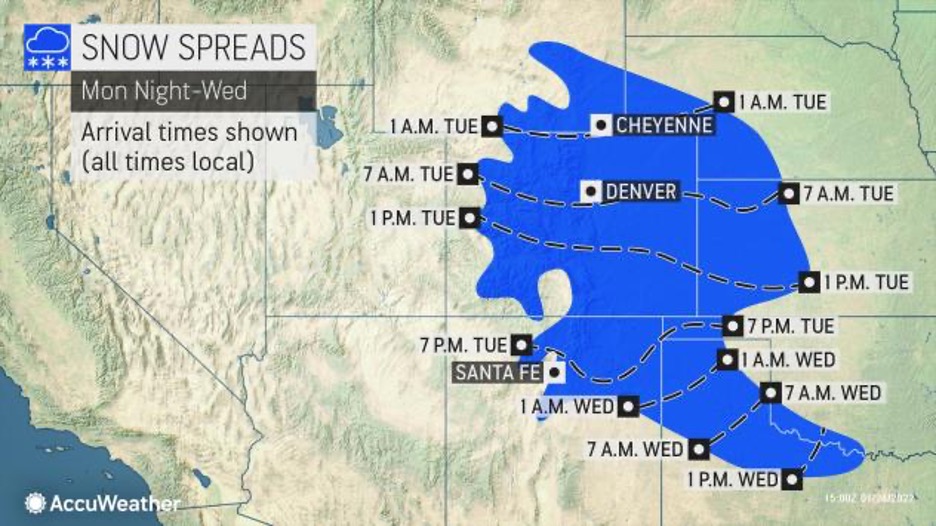 Accumulations of 3-6 inches are also expected across western Kansas, just outside Dodge City, which is anticipated to receive 1-3 inches, and an AccuWeather Local StormMax(tm) of 12 inches will be possible in some locations.

Much of Cheyenne's snow will fall on Monday night, with a total of 2-4 inches of snow expected there by the time the snow stops on Tuesday. Residents of Casper can expect a bit less snow, as the snow will wind down before dawn on Tuesday and likely total close to an inch or two. This will pale in comparison to the nearly 7 inches of snow Casper reported last Friday when a storm pushed out of the Pacific Northwest and across Wyoming.

"Residents in Denver will notice a drop in temperature between Monday and Tuesday," said Smithmyer, adding that temperatures on Monday are expected to reach 45 degrees Fahrenheit, which falls on point with the city's average for this time of year. 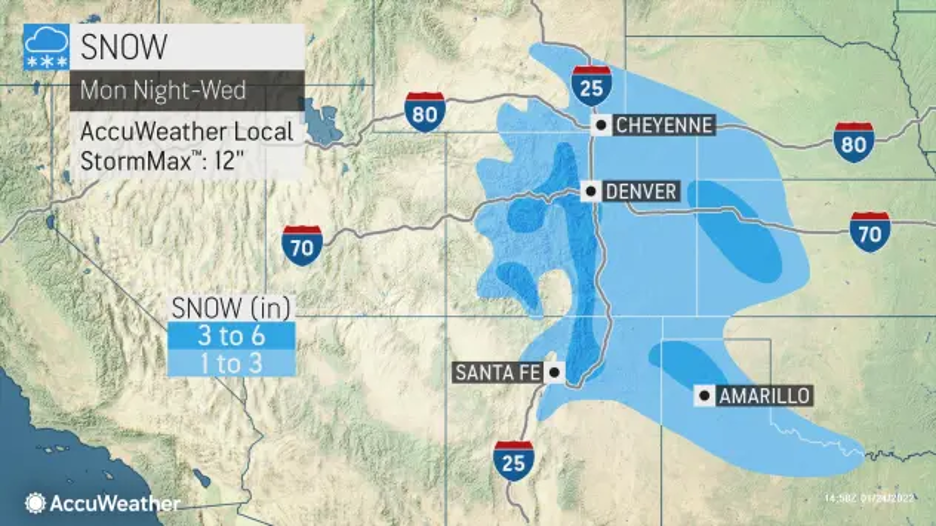 Snow will begin falling by sunrise on Tuesday in Denver, with a total of 2-4 inches forecast by the afternoon, accompanied by temperatures struggling to reach the upper 20s, which is well below normal. On Tuesday night, temperatures could fall into the lower teens, at least 5 degrees below the average of 19 F.

After the sun falls on Santa Fe, New Mexico, on Tuesday, snow is expected to arrive across the northern tier of the state. On Wednesday morning, residents of Santa Fe may wake up to 1-2 inches of snow on the ground along with lingering flurries early as the storm turns towards northern Texas.

Amarillo, Texas, could receive a few inches of snow from this storm, while Lubbock, Texas, can expect anywhere from a dusting to an inch of snow from Tuesday night into Wednesday. 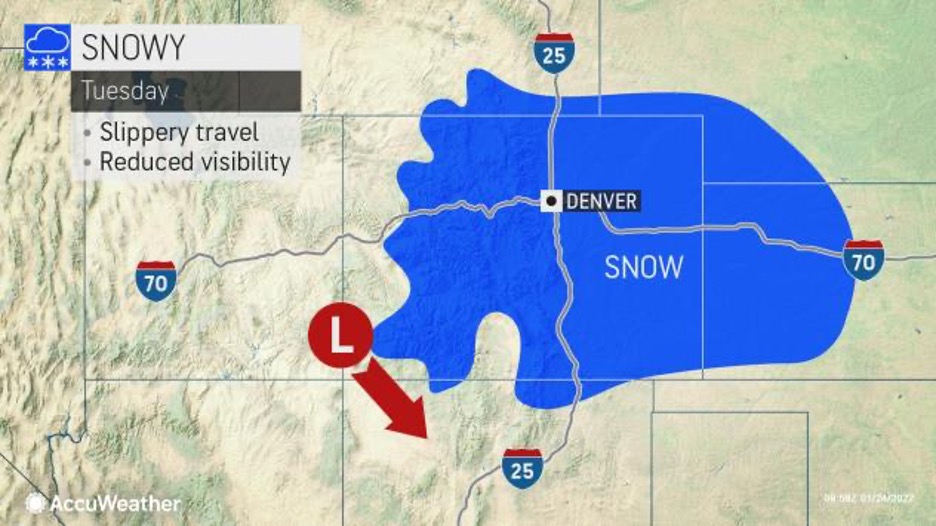 Those traveling across interstates 25, 27, 40, 70, 76 or 80 should be aware of diminishing visibility and slippery roadways as snow coats the highways. Bridges and overpasses are typically going to become dangerous first, but if enough snow falls, any road can become hazardous.

Denver typically receives about 6.5 inches of snow throughout the month of January, and the Mile High City has already reported 5.6 inches, mainly from a snowstorm that occurred toward the beginning of the month on Jan. 5 and 6. With this next storm, Denver is expected to blow past this average.

Last year, the city received just over 3 inches of snow during the month of January, and in 2020, the city didn't even receive an inch. This year doesn't come close, however, to the snowiest January on record in 1992, when 25 inches fell, nor is it as low as in 2003 when it only snowed 0.3 of an inch.