(The Center Square) - Governors in wildfire country had a message for President Joe Biden and Congress on Friday: it's time for the federal government to step in and manage its forests because their state resources are running on empty.

In 2021, 83 large fires have burned more than 1.7 million acres in 13 states, the National Interagency Fire Center reports. Some 547,000 acres have been lost to fires in Oregon, where the state's Bootleg Fire has swelled to 413,000 acres and has become the nation's largest fire. While some 22,000 wildland firefighters and support personnel beat back the flames nationwide, states governments are calling on Biden to help them rewrite the nation's firefighting playbook. 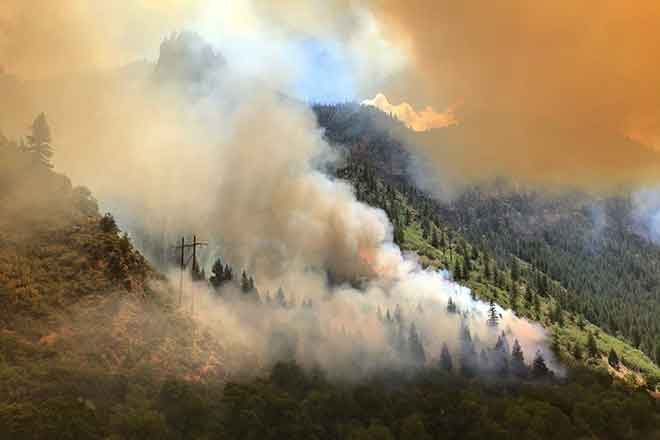 California Gov. Gavin Newsom said as much to Biden on Friday at a virtual news briefing. More specifically, Newsom took aim at the U.S. Forest Service response to the Tamarack Fire south of Lake Tahoe that grew to 625 acres before creeping into Nevada over little more than a three-week span this month.

"The U.S. Forest Service is spectacular, we have deep admiration for, but there is a culture that is too often wait-and-see," Newsom said. "We can't afford that any longer. This was a federal fire and what we saw is the fire took off because we didn't put [forth] enough initial assets."

Federal authorities manage more forest land in California than any other state in the nation or 57% of the Golden State's 33 million acres of wild lands. The state controls just 3% by comparison.

Events like the Tarmack Fire underscore how overextended California's resources are this wildfire season. The state has some 7,400 firefighters on the ground this week. They have fought 5,700 fires to date in 2021, according to CalFire. They put out 59 on Thursday alone, but Newsom says the state's firefighting aircraft are in danger of running on empty.

Montana Gov. Greg Gianforte echoed Newsom's call for more boots on the ground. Some firefighters agreed. Sam Martin, who conducts air operations for the USDA Forest Service, wrote in a blog posted to INCIWEB, "we don't put fires out without boots on the ground."

In Oregon, Brian Deck, who works on Air Ops Branch for Bootleg, says an initial air attack "is like preventative medical care. It's easier to prevent fires from spreading than treat large fires."

Washington state's Department of Natural Resources, according to Doug Forsyth, a spokesperson for the agency, has 39 aircraft fighting fires statewide. Fuel is no problem for the moment, but the state's drought emergency and eight large fires burning east of the Cascades are raising concerns that the 240,000 acres lost to fire so far are just the start.

It was Washington Gov. Jay Inslee who raised concerns Friday about the state of Biden's trillion-dollar infrastructure plan in the nation's other Washington. Inslee said the plan must be a green one if the nation intends to meet its emissions goals and mitigate the arid conditions he says are fueling fires.

"There is only one way to prevent these forests from being gone in the next century effectively, to be totally unrecognizable," Inslee said. "We have to have those climate investments."

This year, Washington is among a host of states which greenlit climate-centered investments like more electric charging stations and a cap and trade bill.

Arizona's Doug Ducey, whose state has lost more than 480,000 acres to wildfires this year, was notably absent on Friday. He was allegedly not invited to Biden's last wildfire briefing in June. His office didn't respond to questions about his absence.

Next US energy boom could be wind power in...

Americans enduring scorching heat amid a...