Why are food manufacturers adding potentially carcinogenic potassium bromate to the flour of many of the packaged baked goods we consume? What are the risks and how can we minimize them?

It may sound strange, but there are still many food manufacturers across the world who choose to enhance the quality and appearance of their baked products by adding the carcinogenic compound known as potassium bromate (KBrO3) to their flour.

Potassium bromate, a "potential human carcinogen" as deemed by the International Agency for Research on Cancer, is often used as an oxidizing agent during the production of baked goods such as bread or pizza.

For a baked good to achieve that fluffy, high-risen appearance and texture, it must be oxidized first. In the past, dough would be kneaded repeatedly by a baker, then left out in the open air to oxidize naturally; a process that can take days, even weeks. Potassium bromate shortens this process by directly and more potently strengthening the bonds between gluten (the constituent parts of any baked good), resulting in a more efficiently made, better-looking baked product. 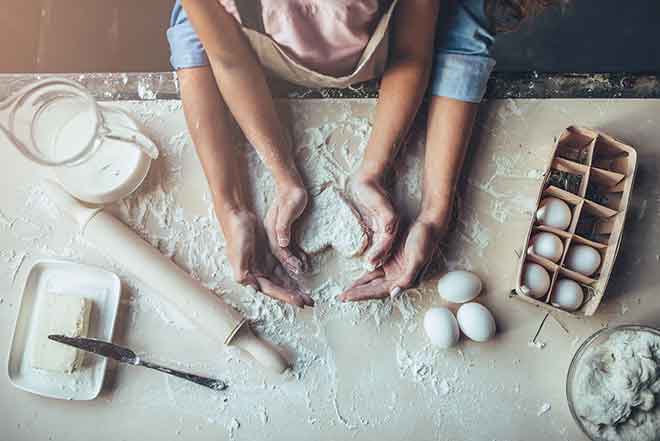 But is the possibility of cancer worth it? Potassium bromate is unfortunately an excellent source of free radicals (unstable atoms) called reactive oxygen species (ROS), the kind that cause mutations in our DNA. These mutations can in some cases accumulate, producing cancers of the thyroid, liver, and kidneys.

In 1982, Japanese researchers were the first to publish a series of papers stating that potassium bromate was causing these different types of cancer in rats. Many countries shortly thereafter banned its use (Including the European Union, Argentina, Brazil, Canada, Nigeria, South Korea, and Peru, among others). The FDA, however, felt that the US need not ban potassium bromate as levels in most baked goods sold were unlikely to exceed 20 parts per million (ppm), an amount deemed safe for human consumption.

Before you run to the nearest poison control center, remember that it is the quantity of potassium bromate in the product that ultimately determines its carcinogenic potential, not its mere presence. According to the FDA, 50 ppm (parts per million) is the upper limit for its use in bromated flour. As for its use in bread, 75 ppm is considered the limit for safe human consumption.

If you're a hobbyist who enjoys baking their own bread or other similar products, it should be noted that if your product fails to reach a high enough temperature, or if it isn't baked long enough, it may contain residual amounts of potassium bromate. Your best option for baking carcinogen-free items is by using unbromated flour, although the process is a little different. More mixing is required (as there is less oxidative potential), as well as the setting of a lower initial temperature (due to the temperature increase from the mixing).

As for those hoping to purchase unbromated baked goods, it is of course required by law that all ingredients be stated on the packaging. If you're lucky enough to live in California, a warning label stating carcinogenic ingredients should be visible on the packaging. Keep an eye out for "potassium bromate" or "bromated flour" -- and if you see either ingredient, do yourself a favor and put it back.

Why Salman Rushdie’s ‘The Satanic Verses’...