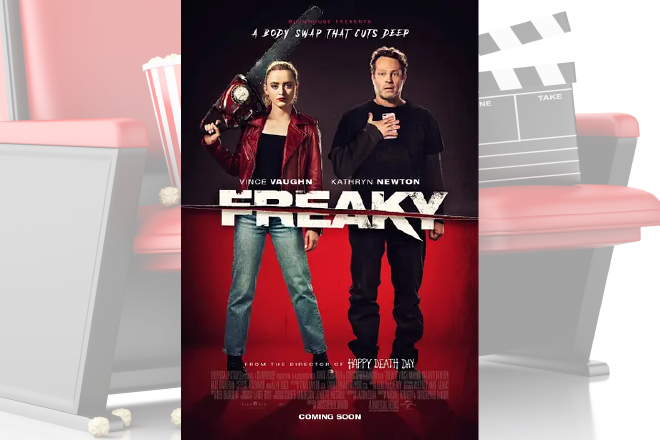 I wish this movie had been called "Freaky Friday the 13th." The film is a cross between "Freaky Friday" and "Friday the 13th." It also takes place on Friday the 13th and annoyingly insisted on opening on a Friday the 13th, causing it to miss a Halloween release during a season that really could have used a better horror movie than "Come Play." But I say that about the title because it would have been such a nice tribute to late "Jeopardy!" host Alex Trebek to have it fit the format of the show's "Before & After" category. We don't get that, but we get a pretty good slasher movie, assuming you think there is such a thing as a "good" slasher movie.

"Freaky" initially stars 50-year-old Vince Vaughn as an unnamed serial killer known as The Blissfield Butcher (horror movies love ironically idyllic names like "Blissfield") and Kathryn Newton as Millie, a bullied high school girl in line to be The Butcher's next victim. Following an opening killing spree filled with over-the-top gore, The Butcher steals an ancient dagger that turns out to be cursed. The Butcher attacks Millie with the weapon, both get nicked but both survive, and abra-ca-dagger, the characters wake up the next morning in each other's bodies. NOTE: In my description of the rest of the film, I will refer to the characters by the personality inside their bodies, but actors by their bodies.

The Butcher is happier with the arrangement than Millie. He gets to eat a nice breakfast courtesy of Millie's clingy widowed mother (Katie Finneran), he gets to play around with his new female anatomy, and he can continue his killing spree as someone that nobody would suspect. The downside is a smaller frame that takes away his ability to overpower his victims, but he makes up for it with viciousness and the element of surprise.

Millie, meanwhile, is in a lot of trouble. A police sketch, courtesy of her cop sister Char (Dana Drori) has been posted around town, making everyone aware that her new face is that of The Butcher. After a long chase and fight scene, she manages to convince her friends (Celeste O'Connor and Misha Osherovich) that she's really Millie and that they need to help her retrieve the dagger and stop The Butcher before midnight or she'll never get her body back. Adding to Millie's woes is that the group has to bring her crush (Uriah Shelton) on board, and she finally gets to spend some quality time with him, but he's not likely to fall in love with her new body.

The best thing about the movie is the Vince Vaughn performance, especially as Millie. Not only does he do an excellent job of imitating a teenage girl, but there are scenes where Millie has to act like an adult to gain certain advantages, and she doesn't quite pull it off, and he nails those too. To reiterate: Vaughn, an adult male, is convincing in scenes where the teenage girl inhabiting his body struggles to sound like an adult male. I wish I could say that Newton is equally memorable in scenes where she's The Butcher, but the script just lets her get in a few grunting words at a time. Shame, because Newton seems like she's capable of much more. She was doing fine as Millie, who is a likeable and well-written character with an engaging family struggle no matter her body.

"Freaky" is a lot of fun, with body-switch, high school drama, and slasher movie jokes filling almost every minute of screen time. I can't say they all land, but the tone is always humorous, save for a few scenes where it's an effective straight-up horror movie. It's not going to be everybody's cup of tea with its excessive death and gore, but if you can giggle at "this character is so dead" tropes, you'll have a good time.

"Freaky" is playing in theaters, check local listings for showtimes. The film is rated R for strong bloody horror violence, sexual content, and language throughout. Its running time is 102 minutes.