Movie Review - In the Heights 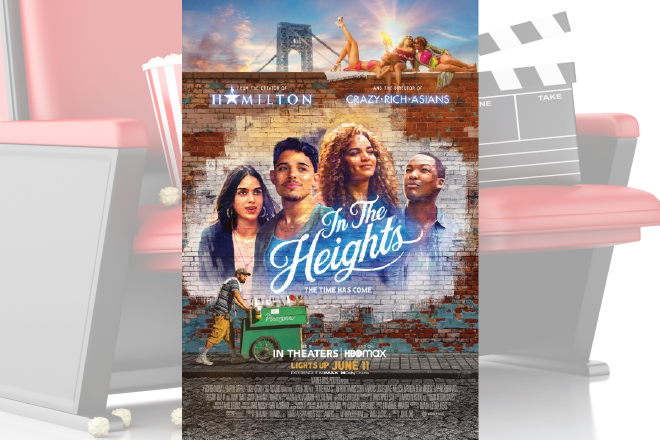 "In the Heights" is based on the 2008 Tony winner for Best Musical that put Lin-Manuel Miranda on the map. It is not to be confused with "Hamilton," the 2016 Tony winner for Best Musical that saw Miranda conquer the world. The film follows characters from the largely Latin Upper Manhattan neighborhood of Washington Heights as they pursue their "suenitos" or "little dreams." Big dreams are unrealistic, but with hard work and perseverance, suenitos are achievable, though they're not without their obstacles. Right now my suenito is that more people see this movie, because a second-place debut behind the third weekend of "A Quiet Place Part II" is unfitting for such a superior affair.

Usnavi (Anthony Ramos) dreams of closing his meager bodega and moving to the Dominican Republic to take over his late father's ramshackle bar. But this would mean leaving behind the neighborhood and people he cares about, like his cousin Sonny (Gregory Diaz IV), communal abuela Claudia (Olga Merediz), and longtime crush Vanessa (Melissa Barrera), who herself dreams of leaving her dead-end job at a failing beauty parlor and becoming a fashion designer. While Usnavi and Vanessa want to escape the neighborhood, Nina (Leslie Grace) dreams of being welcomed back. She recently underwent a humiliating year at Stanford and doesn't want to go back, even though her father Kevin (Jimmy Smits) sold half of his cab business for his own suenito of having his daughter go to a good college. Benny (Corey Hawkins) splits his suenito between his career at Kevin's company and pursuing a relationship with Nina, but the rift between Nina and Kevin might force him choose between the two. And so the suenitos go throughout the cast, from a trio of beauty workers (Daphne Rubin-Vega, Stephanie Beatriz, Dascha Polanco) who want their customers to follow them to their new location in the Bronx, to a piragua vendor (Miranda) who doesn't want to lose his business to Mister Softee.

It would be nice if there were easy answers, and briefly it seems like someone may get one in the form of Usnavi's store selling a $96,000 winning lottery ticket. But the ticket is not claimed and it becomes apparent that life is not something to be fixed by shortcuts and windfalls. It's much more likely that one will face a blackout, like the one that dominates the middle of the film. It takes compromises and hard decisions, often filled with uncertainty. But making those decisions for and with the people you love makes them seem so right.

As with life, "In the Heights" has its heavy moments, but the hardships rarely seem forced or unrealistic, save for a rift between Usnavi and Vanessa that seems born out of a relatable case of self-sabotage. Most of the film is very upbeat, as the residents of Washington Heights never pass up the opportunity for a party. And by "party," I mean an elaborate musical number filled with Miranda's trademark blend of singing and rapping. I honestly had no idea rap could sound so beautiful until I saw a performance by the Broadway cast at the 2008 Tonys. As for the transition to film, it just allows for larger sets, more dancing, and cinematography and special effects that only enhance the spectacle. The only thing lost is that a trick with its framing device, which I suspect was pulled off better on Broadway, now seems like a flat-out cheat. But that inconsistency aside, this is a delightful, energetic film that can't be seen soon enough. I predict that if you pass up the opportunity to see it now, you'll regret it come Oscar time.

"In the Heights" is playing in theaters and on HBO Max (but I strongly recommend seeing it in theaters). The film is rated PG-13 for some language and suggestive references. Its running time is 143 minutes.