Movie Review - The House with a Clock in its Walls

Kids need a movie right now. The last month or so has been dominated by adult fare, or at least PG-13 movies that target teens, but don't promise fun for the whole family. "Disney's Christopher Robin" is still playing on over 1,000 screens, but it's clearly on its way out. The release calendar has made it so that kids have to take what they can get, and what they're getting is "The House with a Clock in Its Walls". Fortunately this movie isn't a terrible thing to get, but it's not all that great either.

The story follows the newly-orphaned Lewis (12-year-old Owen Vaccaro) as he moves in with his mysterious uncle Jonathan (Jack Black). It's hard to get a read on Jonathan: he shows up to meet his nephew for the first time wearing a kimono, he plays his saxophone into the wee hours of the morning, he lets Lewis eat cookies for dinner and not after dinner, he's rumored to be an axe murderer, and he lives in a house full of ticking clocks, one of which is coming from an unknown location and really freaking him out. A frequent houseguest is Mrs. Zimmerman (Cate Blanchett), Jonathan's prim next door neighbor who is so often in the house that we're not sure until halfway through the movie that she actually has a place of her own. 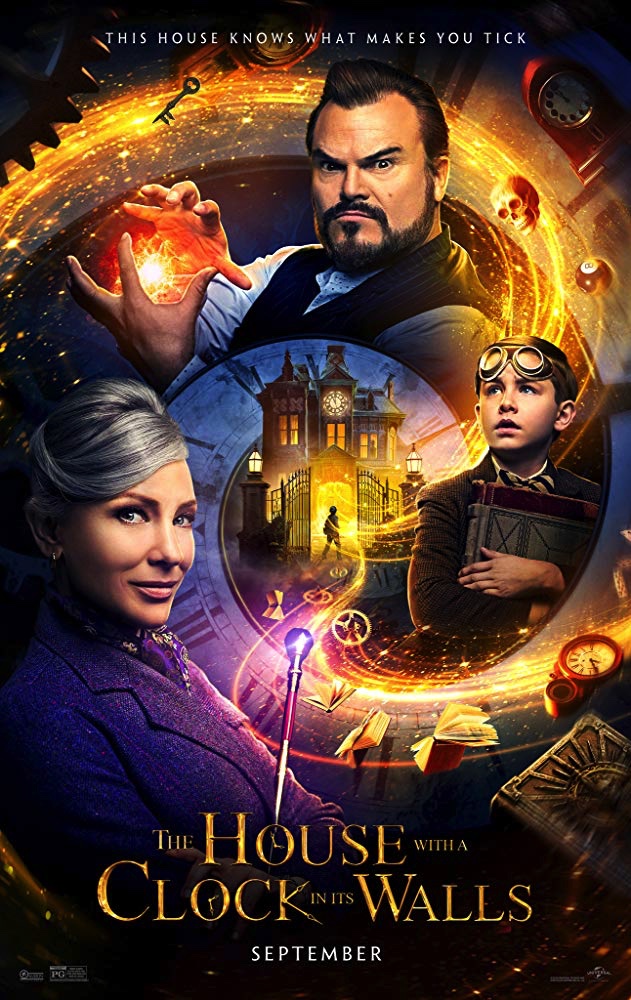 Lewis eventually learns that his uncle and Mrs. Zimmerman are a warlock and witch, respectively, and if he studies hard enough, he too can live a magical existence. Soon he's using his newfound powers to humiliate bullies at school and make his daily routine easier. He learns that his uncle possesses a forbidden Necronomicon, and conceivably he could use it to bring his dead parents back to life. Or he could use it to accidentally raise the villainous Isaac Izard (Kyle MacLachlan), a late warlock who may have killed his wife (Renee Elise Goldsberry) and planted the ominous mystery clock in the house as part of a plan to wipe out all of humanity. Since there wouldn't be much of a movie otherwise, you can probably guess that it's the latter.

The movie is very entertaining in places, especially when it comes to the house itself. Director Eli Roth (of several non-kid-friendly horror movies) fills the setting with all sorts of twisted goodies like creepy carnival games and deranged cuckoo clocks (one of which got a decent jump out of me - rare for a kids' movie). Then again, there are also some bad CGI pumpkins and a topiary lion that keeps forgetting to use its litter box. Certain aspects of the story are intriguing, like the structured Lewis having to adapt to his uncle's life of spontaneity, free-spirited bachelor Jonathan taking on the responsibilities of parenthood, and a kinship Izard feels with fellow orphan Lewis. Sadly, none of these plots are explored as thoroughly or authentically as I would have liked, but the movie is onto something with what we get.

"Onto something", that's a good way to describe "The House with a Clock in Its Walls" as a whole. I can't say that the film is particularly high-quality or memorable, but there's a lot of potential here. Now that Roth has directed his first kids' movie and made some mistakes with the humor and pacing, he can go on to direct a second one having learned from those mistakes. It can even be a sequel to this movie, I'd be fine with seeing these characters again (though maybe with some better coaching for young Owen Vaccaro, as he's truly painful in scenes that require him to ramp up his emotions). If your kids want to see this movie, let them, and then challenge them to think of their own adventures for these characters in this house. Chances are they'll come up with something more interesting than what they actually get.

"The House with a Clock in Its Walls" is rated PG for thematic elements including sorcery, some action, scary images, rude humor, and language. Its running time is 104 minutes.