"Knives Out" bills itself as a whodunit mystery, and to a degree it is, but the "it" in question isn't what it appears to be. The advertising has let it be known that the film revolves around the death of wealthy mystery author Harlan Thrombey (Christopher Plummer) from an apparent suicide. This being a mystery movie, I went in ready to ask who killed Harlan and staged it to look like a suicide. At the very least, I really hoped that the movie wasn't going to take the route where Harlan actually killed himself just to make idiots out of people who suspected murder. But it turned out that I had fallen for just one of the movie's many misdirections. The mystery of the film isn't so much about who was responsible for Harlan's death, but more about who hired renowned private investigator Benoit Blanc (Daniel Craig) to investigate the death, who is interfering in Blanc's investigation, and of course the why of it all. 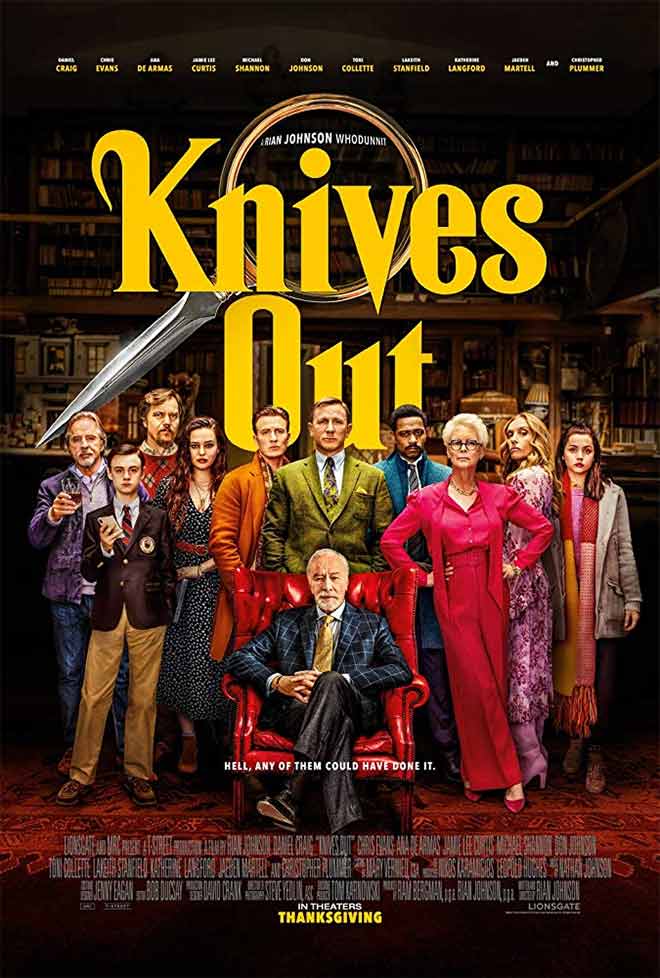 The suspects are primarily in Harlan's family since they were all at Harlan's mansion for his 85th birthday party. Daughter Linda (Jamie Lee Curtis) is a real estate mogul with a cheating husband (Don Johnson) and an obnoxious, spoiled son named Ransom (Chris Evans). Son Walt (Michael Shannon) is the soon-to-be-ousted CEO of his dad's publishing company. He and his wife Donna (Riki Lindhome, whose underuse is one of the film's biggest blemishes) have a son named Jacob (Jaeden Martell) who heard Harlan arguing with Ransom at the party over the elder's will. Conniving daughter-in-law Joni (Toni Collette) was caught embezzling money meant for her daughter Meg (Katherine Langford) and both were about to be cut off. Even Harlan's mother (K Callan, who is six years younger than Christopher Plummer) may be a factor.

There is one more major player, one who's not in the family. Marta (Ana de Armas) was Harlan's kindhearted caretaker. Harlan had a natural love for his family, but he respected Marta more than all of them. It's easy for the police and Blanc to question her because she's physically incapable of lying, reacting with violent illness if she does. She's allowed to tag along in the investigation since she's an insider who knows the family. Although the little-known de Armas is rather shunted to the side in much of the film's advertising, Marta is so important that it's not a stretch to call her the main character of the movie.

One expects a mystery movie to be filled with twists and turns, but I must reiterate what a sharp turn this movie takes around the one-third mark. It basically eliminates the "whodunit" aspect that I was eagerly anticipating, which negatively affected my enjoyment of the middle of the movie, only for the ending to reveal that there was a whodunit element all along. I can't believe I watched that earlier scene and thought that everything was as it seemed, though I was right to think that something about Harlan's health seemed... wrong.

If you see "Knives Out" strictly for the mystery, you'll probably be disappointed, though that doesn't necessarily mean you'll leave disappointed. Instead, just enjoy the ride with the affable de Armas, the crazy, dramatic family (though they aren't in the movie as much as the advertising makes it look), and especially Craig as the eloquent sleuth who's maybe read a few too many of Harlan's detective novels. I thought the movie sometimes went too long between laughs, but when it delivers, they're some of the biggest of the year. The death and the events surrounding it are a bit nonsensical and definitely convoluted, and I can think of a better solution to a key problem that would have saved everyone a huge headache and maybe a life or two (email me at rrg251@nyu.edu if you want to hear my idea, though my response will definitely contain spoilers), but overall this is a fun movie because of the things that work.

"Knives Out" is rated PG-13 for thematic elements including brief violence, some strong language, sexual references, and drug material. Its running time is 130 minutes.