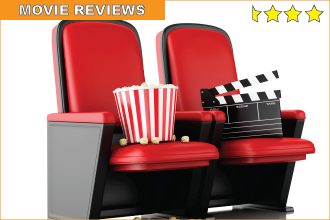 I'm writing this a little over a week before the Oscar nominations are announced, and there are three movies that I can safely say are a lock for Best Picture: "Moonlight," "Manchester by the Sea," and "La La Land." And of these three, "La La Land" is by far the most likely to win. Simply put, it's the biggest spectacle. It's the flashiest, with gimmicky goodies around every corner; goodies like bright colors and trick camera work and of course, musical numbers.

Ryan Gosling and Emma Stone star as a couple of starry-eyed kids struggling to make it in Hollywood. Mia (Stone) is an actress, and while there are thousands of jobs every day for actresses in Hollywood, there are zillions of actresses. She needs a way to separate herself from the pack. Sebastian (Gosling) has something of the opposite problem. He's a jazz pianist and there doesn't seem to be any demand for jazz pianists. But he's happy to suffer for his art. In fact, everybody is happy to suffer. This is a movie where a freeway traffic jam leads to the sunniest opening musical number you can imagine. It's called, appropriately, "Another Day of Sun" and it will make you forget about the very concept of sadness.

As you would expect, after some initial animosity Mia and Sebastian fall in love. The two fill each other with passion, and that passion spills over into their careers. Soon they're aiming higher than ever as they enjoy a state of near-euphoria (you could say they're in La La Land). But it's the aiming itself that makes them so elated, not the follow-through. The reality of their rising stars leads to more responsibilities, scheduling conflicts, extended absences, artistic compromises, miscommunications, accusations, and heartbreak. Can the relationship hold together, or will it crumble like Hollywood romances are known to do?

The movie can do no wrong with its musical numbers. Notes from a song called "City of Stars" are heard throughout the film and will be heard in your head long after the movie is over. Stone belts out an epic called "Audition (The Fools Who Dream)" that might be the most surefire Oscar-clincher since Anne Hathaway dreamed a dream in "Les Miserables." Even the "bad" song, a commercially-successful crowd pleaser called "Start a Fire," sung by a sellout played by John Legend, has more effort and energy than pretty much anything I've heard in the last year.

The movie can, however, do a little bit of wrong in following the lives of the artists. Specifically, it's hard to buy Gosling and Stone as struggling performers. They've been movie stars for so long that it's hard to picture a Hollywood without them. It's not their fault, really. Stone even noticeably holds back during most of her audition scenes so you can see why she wouldn't get those specific roles. But these two can't help but be so gorgeous and charming that to reject them seems unrealistic. If "Moonlight" and "Manchester by the Sea" want to beat this movie out for Best Picture, it would be wise to campaign as the more "flawed" and "human" choice, not that those movies wouldn't do that anyway.

Then again, if my biggest complaint about "La La Land" is that its two leads are too perfect, the movie must be doing something right. Most of the time it's incredibly bouncy and fun, and its more serious and emotional moments are effective too. I can't imagine anybody disliking this movie unless they just categorically despise musicals. If the Oscars go the way they're expected to go, this is going to make a fine Best Picture winner.

Three and a Half Stars out of Five.