It has been 54 years since Julie Andrews first graced movie screens as nanny extraordinaire Mary Poppins. The stern-but-kind governess used a combination of magic and mental trickery to help the Banks family restore order to their chaotic lives. Now children Michael (Ben Whishaw) and Jane (Emily Mortimer) have grown up, and Michael has children of his own: Annabel (Pixie Davies), John (Nathanael Saleh), and Georgie (Joel Dawson). The family has once again hit a rough patch, with Michael's wife having passed, his house in danger of foreclosure, and his well-intentioned children always getting into trouble. From out of the sky comes Mary Poppins (now played by Emily Blunt) to save the day again. 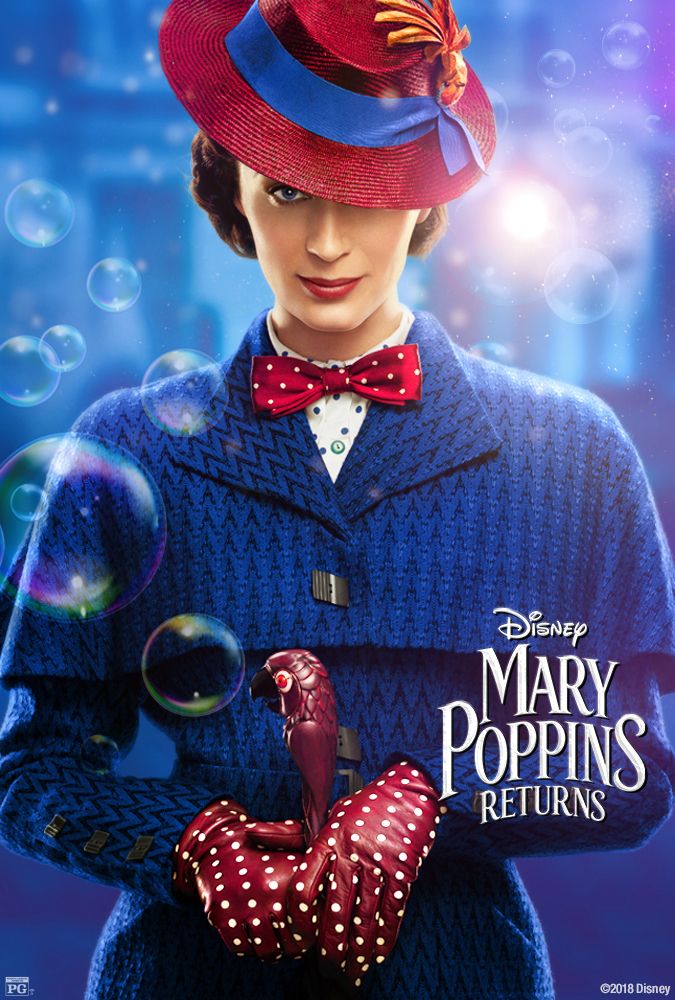 Poppins sees the family through a series of adventures, mostly involving them trying to save their home. Michael took out a predatory loan from his own employer Mr. Wilkins (Colin Firth), who would rather take the house than get his money back. The adults want to pay back the loan with some long-lost stock shares, but the children want to raise money by selling a "priceless" bowl of their late mother's. Some in-fighting leads to the bowl getting broken, which leads to both the best and worst sequences of the film, the former when the characters enter the cartoon world depicted on their bowl, and the latter when they seek repairs from Poppins' confused cousin (Meryl Streep), a stereotype of an unspecified ethnicity.

The family is accompanied on most of their adventures by Jack (Lin-Manuel Miranda), a lamplighter with eyes for Jane who essentially fills the role of Dick Van Dyke's Bert from the first movie. It's mentioned that Bert is still alive, but surprisingly Van Dyke pops up for a cameo elsewhere. I was thrilled to hear that "Hamilton" mastermind Miranda was jumping to the big screen for this movie, but his contribution is a bit of a let-down. He's often either struggling with his cockney accent (not that Van Dyke exactly nailed it in the original either) or getting swallowed alive by the overproduction of his center-stage number "Trip a Little Light Fantastic." Only momentarily, as he tells a convoluted story during a portion of the Blunt duet "A Cover is Not the Book," is he the Lin-Manuel Miranda we know and love.

The movie comes in just under the mark on a number of occasions. Maybe it's the direction of Rob Marshall, whose stagey musicals I've never much cared for, including the Oscar-winning "Chicago" (I'm only referring to live-action sequences here, not the superior animated ones, even one that does in fact involve a stage) Maybe it's the weird inconsistency of the "saving the house" plot, with Firth's villain giving the family every opportunity to best him despite it going against his better interests. But I think the film is mostly mediocre because of the inevitable comparisons to the original. When you're going up against an all-time classic, flawed-yet-agreeable just doesn't cut it.

Still, I recommend seeing this film. What, you think I'm going to tell you to stay away from something as sweet as a "Mary Poppins" movie? The cast and crew are clearly putting their best foot forward, sensitive song "The Place Where Lost Things Go" is likely to get an Oscar nomination, and characters float under the sea in bubbles and up in the sky in balloons. Take the family to see "Mary Poppins Returns" and you'll have a perfectly fine time. You won't be getting a Disney classic, but you'll get a movie that everybody can at least enjoy.

"Mary Poppins Returns" is rated PG for some mild thematic elements and brief action. Its running time is 130 minutes.