Like any proper franchise, "Mission: Impossible" has to up the ante with each new installment. This concept means different things to different people. Maybe it means that Ethan Hunt (Tom Cruise) and his team are up against their most diabolical villain yet. Maybe it means their challenge is the hardest-to-crack yet. But "Mission: Impossible - Fallout" knows that what the majority of fans want is the best action yet. The film certainly gives us the "most" action yet - it's the better part of three hours if you include trailers - but it's also action of the highest quality, and the highest craziness.

I won't give myself a migraine trying to recap the plot, just know that the world is in danger and it's up to Hunt and his team to do their secret agent thing and save it. Hunt is flanked by his longtime cohorts Luther (Ving Rhames) and Benji (Simon Pegg), former enemy Hunley (Alec Baldwin) helps the team briefly, and eventually old MI6 ally Ilsa (Rebecca Ferguson) tenuously joins in. Also returning is Solomon Lane (Sean Harris), the villain from the last movie, who needs to be kept alive for purposes of trading. New to the game are CIA director Erica Sloane (Angela Bassett), top agent August Walker (Henry Cavill), and black market broker White Widow (Vanessa Kirby). The players bounce around in typical spy movie fashion, with some secretly having their own allegiances and agendas. This is the kind of movie where you know there will be a lot of twists, so the fact that there are a lot of twists is ironically predictable, even boring. 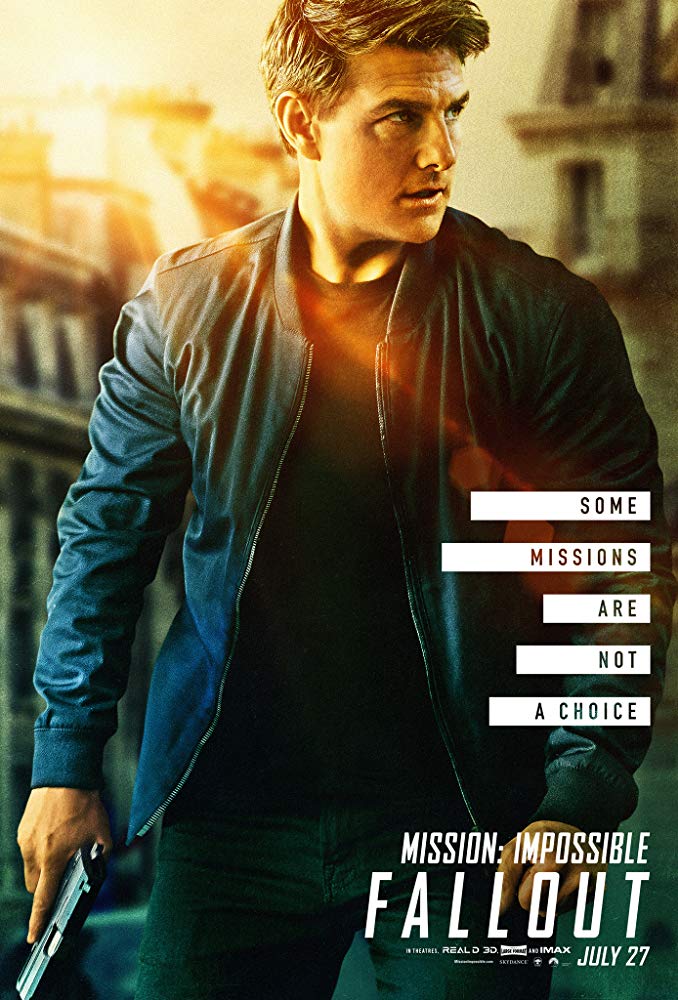 Before I get into the action, let me say that the film succeeds on levels other than action. The dry humor with Cruise works, the broad humor with Pegg works. There's some stirring material on the relationship between Hunt and his ex-wife (Michelle Monaghan). As this is a "Mission: Impossible" movie, there are a few twists where characters disguise themselves with latex masks of other people. These scenes have a tendency to be contrived, but at least one makes for an interesting cameo. The only area where the otherwise-tight script really misses the mark is in the writing of the Cavill character, who would work better without such a brawn-over-brains approach.

And then of course there's the action. Before the opening titles, we get a tense shootout and an interrogation that threatens to turn unusually ugly. Then there's a harrowing skydiving sequence where it's clear that megastar Cruise is really jumping. Also jumping is at least one camera operator, kudos to them for their dangerous work. After that, we get a bone-crunching fistfight and an air-swooshing knifefight (kudos to the sound people as well). The bulk of the film takes place in Europe, so we get some of those close-quarters car chases where the characters (and again, the camera operators) are consistently about an inch away from catastrophe. Hunt engages in a heart-pumping foot chase in the way that only Tom Cruise can. The climax of the film involves a death-defying climb onto a helicopter, some death-defying antics with two helicopters, and a death-defying showdown on a cliff where the two helicopters are still very much in play, all while two nuclear bombs are in countdown mode. Again, it's really Cruise doing much of the death-defying, and I'm sure the tech people are in a precarious situation as well. I'm not saying they're being reckless, but it's hard to tell how they pulled it all off safely.

It's hard to imagine a movie packing in more action than "Mission: Impossible - Fallout". It's even harder to imagine what the next "Mission: Impossible" movie is going to have to do to up the ante from this one. If you're looking for an exciting summer blockbuster, this is one "Mission" you should choose to accept.

"Mission: Impossible - Fallout" is rated PG-13 for violence and intense sequences of action, and for brief strong language. Its running time is 147 minutes.