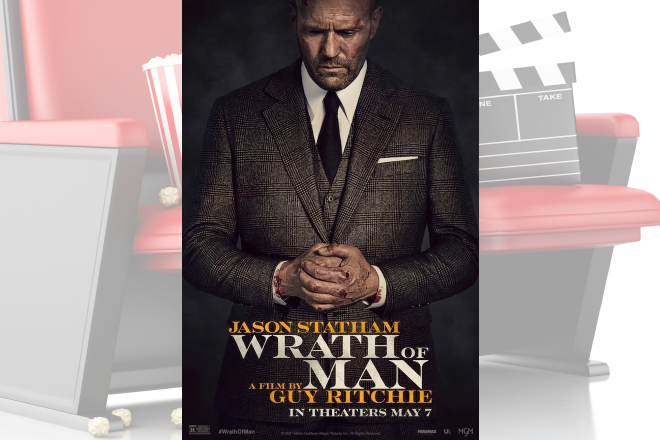 The chronology of "Wrath of Man" is all out of whack and it's hard to know what is and isn't a spoiler. What we know from the trailers is that H (Jason Statham) gets a job at an armored car company where three months earlier two employees and a civilian were killed in a robbery. H is eventually confronted with robbers and dispatches with them with ease beyond his job description. But he's never happy with the results of his heroics. He's got a goal in mind that has nothing to do with protecting other people's money, or even his brothers in arms.

Following an intense pre-H robbery sequence in the opening, the film is divided into four quarters, complete with Tarantino-esque title cards. The first quarter is what we know, H is hired by the well-meaning but clueless Terry (Eddie Marsan) and trains under high-ranking employee Bullet (Holt McCallany). He's introduced to various faces around the team, including the standoffish Boy Sweat Dave (Josh Hartnett) and maneater Dana (Niamh Algar). He soon gets a reputation for violent, teammate-saving antics that endear him to some, but earn distrust from others. H is secretly conducting some sort of investigation, and signs are pointing toward Boy Sweat Dave, but I didn't buy for a second that the high-strung shlub had it in him to be a major bad guy in this world.

The second quarter goes backwards in time and confirms what we suspect: H is related to the civilian killed in the robbery, his son. He got the job with the armored car company in hopes that the same robbers would hit them again, this time with him ready for them. What the trailers didn't let us know was exactly who H is. Seeing as he's played by Statham, it's no wonder he's someone dangerous, but I was taken off guard by the degree. Prior to the undercover angle, H is given a list by an FBI contact (Andy Garcia) of criminal operations that might be responsible. He plows through them coldly, never appreciating that he's doing some good with his life for a change. He's just frustrated that he's having no luck finding his son's killer, hence the need for the new approach.

In the third quarter, we meet the gang responsible for the opening robbery, and it's not anyone on the FBI's radar. Jackson (Jeffrey Donovan) and his friends are a group of bored ex-soldiers tired of waiting for their fortunes to change. They hit the truck expecting to make a clean getaway, but lackey Jan (Scott Eastwood) panics and commits the murders. Despite that hiccup, the robbery was a success, so everyone including Jan is invited to partake in the next robbery of the armored car depot itself. There's just the little matter of H...

The final quarter of the film is the climactic robbery and inevitable showdown, but it's too late. The second and third quarters mucked around with the timeline, motivations, and loyalties so much that I was confused and disinterested when I was supposed to be invested and excited. Gone is the promise of the first quarter, where director Guy Ritchie was bringing out the dry-cool best of frequent star Statham. I was looking forward to seeing this character H really be tested, but somewhere along the way, I just wanted the movie to be over. I knew he was more than just a super-competent adrenaline junkie, but did his backstory have to be so convoluted? And do the bad guys have to be so dumb at such a pivotal moment? And does the final sequence have to be so drawn-out? Isn't efficiency supposed to be a major part of an operation like this? Whatever, the point is that I wasn't enjoying myself by the end, as the movie had used up ability to pull off a surprise in the second quarter.

"Wrath of Man" is rated R for strong violence throughout, pervasive language, and some sexual references. Its running time is 118 minutes.