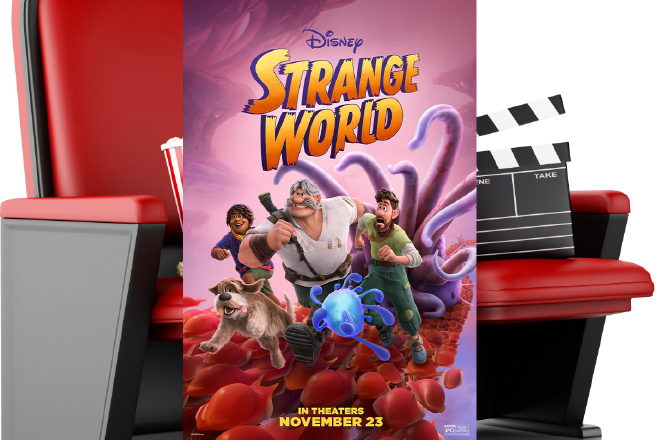 Like the "World" of a certain movie, the holiday weekend at the domestic box office sure was "Strange." It's not so strange that "Black Panther: Wakanda Forever" continued its dominance in first place. But it was strange the forgettable "Strange World" was able to take the second-place spot when there was clearly more interest in third-place finisher "Glass Onion: A Knives Out Mystery." The problem is that "Glass Onion" is only playing on a sixth as many screens as "Strange World," and its theatrical release window is limited to a week. I've decided that the fair thing to do is give both movies a mini-review.

Disney's latest animated offering follows a family from a town completely surrounded by unpassable mountains. Explorer Jaeger Clade (Dennis Quaid) makes it his life's mission to conquer the mountains, at the expense of his relationship with his son Searcher (Jake Gyllenhaal). The two have a falling-out when Searcher abandons the mission in favor of bringing energy-conducting plants called Pando back to the town.

Twenty-five years go by. Searcher is hailed as a hero for discovering Pando, and starts a successful farm with his wife Meridian (Gabrielle Union) and son Ethan (Jaboukie Young-White), but Jaeger never returns from the expedition. Problems arise with Pando that call for Searcher to go on a mission deep under the surface to try to restore it. Meridian and Ethan tag along, and before long they all encounter the long-lost Jaeger. Adventure and family dysfunction ensue.

The family dynamic is about what you'd expect from Disney (minus anyone dying in the first act, thankfully). Everyone has their flaws, everyone realizes they need to adjust their way of thinking, everyone learns a lesson. The actors give heartfelt performances, but there's not much heart in the way the characters are written. The film has an impressive visual style, even more notable after the missed opportunity that was "Lightyear," though I have to wonder why the characters are human when their world's ecosystem is so different from ours. "Strange World" is a feast for the eyes, if not for the brain.

"Strange World" is rated PG for action/peril and some thematic elements. Its running time is 102 minutes.

"Glass Onion: A Knives Out Mystery"

Back in 2019, "Knives Out" introduced the world to southern-fried super-sleuth Benoit Blanc (Daniel Craig) in a much-heralded revitalization of the "whodunit" genre. Now Blanc is back, ready to solve a murder at the private island residence of billionaire mystery-lover Miles Bron (Edward Norton). Bron has invited his friends to come and solve his murder. Is Bron about to be murdered? Is someone else about to be murdered? Has someone already been murdered? Those are all legitimate questions, and they bear answering before the "by whom?" part can really kick in. 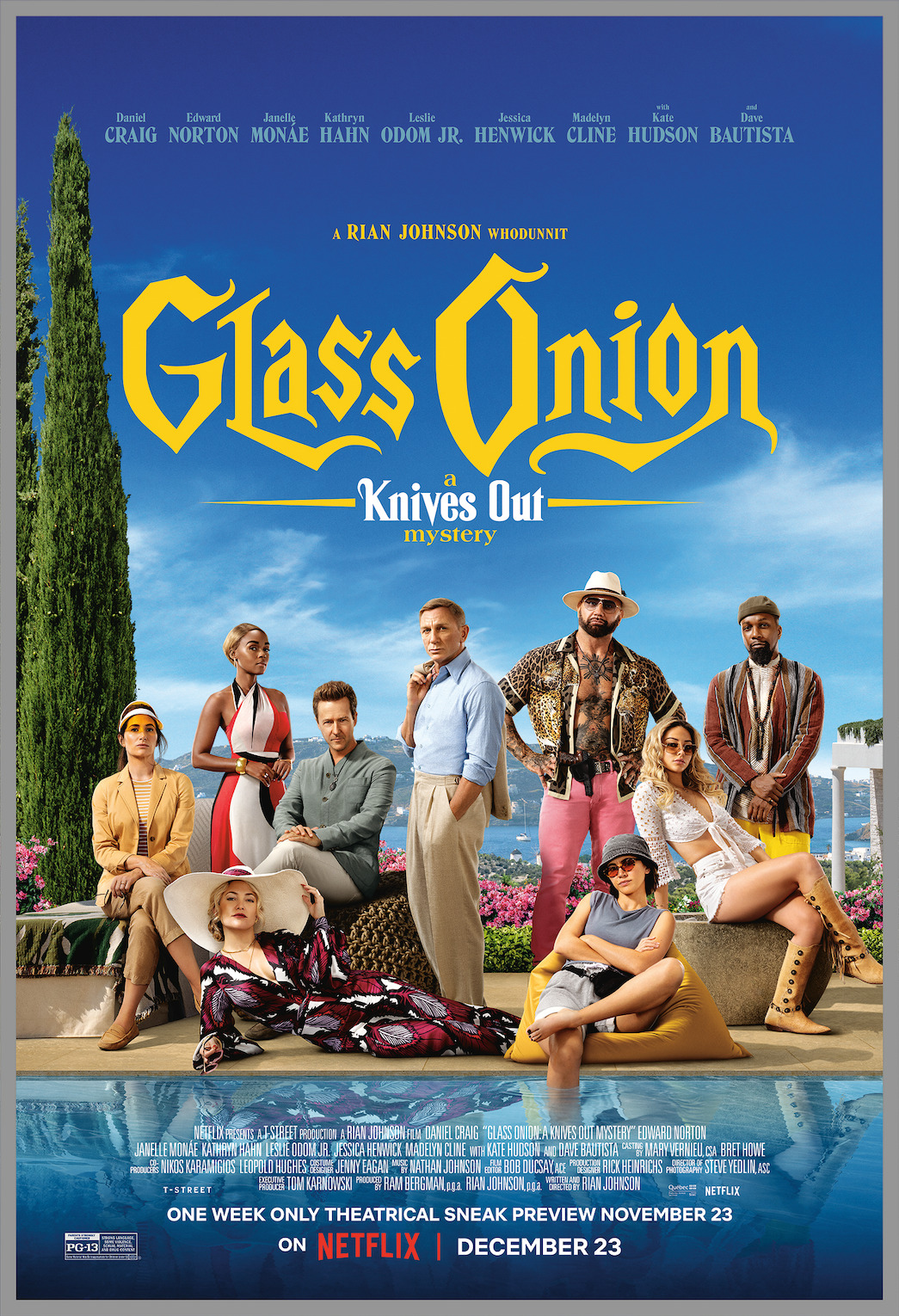 Bron's guests include a governor in the midst of a Senate campaign (Kathryn Hahn), a world-renowned scientist (Leslie Odom Jr.), a disgraced fashion icon (Kate Hudson) and her harried assistant (Jessica Henwick), a men's rights activist (Dave Bautista) and his scheming girlfriend (Madelyn Cline), and a mysterious woman (Janelle Monae) with no interest in playing Bron's games. It's implied that these characters are "suspects," but for there to be suspects, there has to be a crime, and as with the first "Knives Out," it's a mystery as to what the crime even is.

You can drive yourself crazy trying to "solve" whatever crime may or may not be committed, or you can just enjoy the ride. Craig, Norton, Monae, and especially Hudson give great comedic performances. I could watch these characters for hours, and frankly this movie could have used another hour so we could get a more satisfying conclusion. I suppose that like the film's theatrical release window, we should just be grateful that we get as much as we do.

"Glass Onion: A Knives Out Mystery" is playing in select theaters through November 29. The film arrives on Netflix December 23. The film is rated PG-13 for strong language, some violence, sexual material and drug content. Its running time is 140 minutes.

Utah pitches in to help with wildlife...