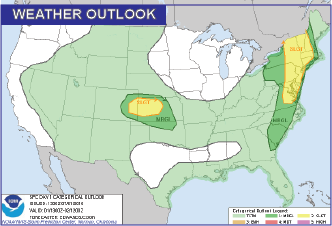 UPDATE: a Flash Flood Watch is in effect until midnight, and rainfall amounts are now projected to be in the three-quarters to one inch range.

Monsoon-like moisture typically expected in late July and early August has made an unfortunate appearance for harvest season.

The Storm Prediction Center in Norman, Oklahoma, confirms a potentially active day in Kiowa County Friday, with a risk of strong winds, hail to one inch, and even the possibility of tornadoes.

The next 24 hours will be active, with concerns for heavy rains producing localized flash flooding. A short-term flash flood watch could be issued later Friday, and storms could reach strong to severe levels. A flash flood watch is already active in Cheyenne and Kit Carson Counties. One-quarter to one-half inch of rain can be expected tonight. Higher amounts are possible where thunderstorms occur.

High temperatures will be below seasonal norms. Low 80s are expected Friday and Saturday, while Sunday could reach the mid-80s. Independence Day will see the return of low 90s. Overnight lows will be around 60.