Precipitation varied across Wyoming for the week ending August 28, 2022, according to the Mountain Regional Field Office of the National Agricultural Statistics Service, USDA.

Precipitation levels were mostly below normal in southern portions of the State. Scattered areas of the south received up to 0.4 inches of rain, but in many areas, amounts were zero to trace. Northern areas fared somewhat better, with minor portions of the northwest receiving approximately an inch of rain.

Temperatures once again ran above average. All of Wyoming saw temperatures ranging from 1 to 5 degrees above normal, with mostly the north and west seeing the warmer conditions.

Changes in drought conditions were minimal. According to the US Drought Monitor for August 25, 2022, the amount of land that was drought free remained unchanged at 9.9 percent. Portions of the State experiencing abnormal dryness fell by 0.7 percentage points to 34.6 percent. The amount of land experiencing moderate drought increased to 34.3 percent, up 0.7 percentage points from 33.6 percent the previous week. Both severe and extreme drought conditions remained unchanged at 19.6 and 1.6 percent, respectively. 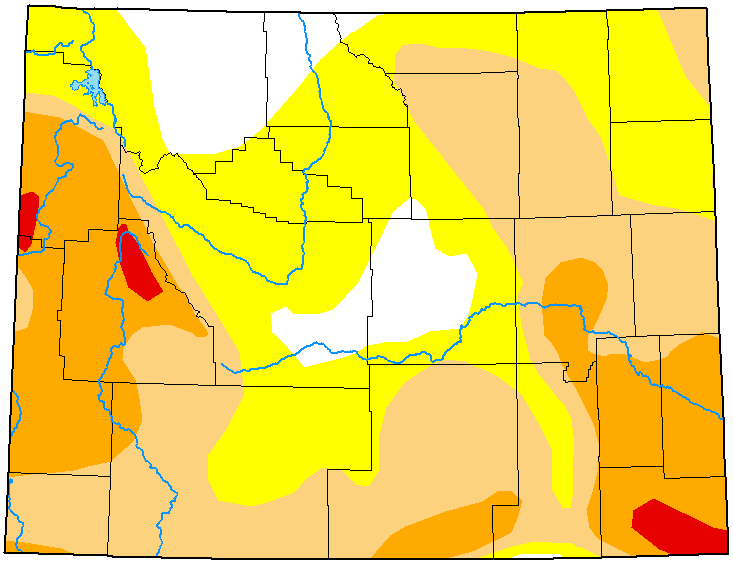 Autumn was fast approaching in Lincoln County. Mornings were getting cold with the likelihood of a freeze in the near future. Conditions were still dry, with a strong need for moisture.

Platte County was also in dire need of moisture. No precipitation was received last week. Pastures and dryland crops suffered under the warm and dry conditions. Even pastures with new growth showed signs of stress.

Deadline for 2022 Census of Agriculture...