EarthTalk – How do Democrats and Republicans differ on climate change?

How can it be that climate change--the major planetary issue of our time and a primary issue for Democrats--isn't even on the agenda for Republicans in the upcoming elections?

Americans, regardless of political affiliation, all live on this planet together and share its ecosystems and resources. Yet there is a deep divide among us with regard to environmental policies and climate change. Nothing underscores this divide more than Donald Trump's rolling back of nearly 100 mostly Obama-era environmental regulations since 2017. And during the 2020 Republican National Convention, climate was not mentioned once, apart from Trump's bragging about leaving the Paris Climate Agreement.

Climate and environmental issues were once a bipartisan concern. As early as 1900, Republicans and Democrats in Congress were passing bills on environmental issues together. One of these bills, for example, was the Endangered Species Act which was passed unanimously in 1973 by the Senate and later by a 390-12 vote in the House (another bill President Trump is in the process of dismantling). 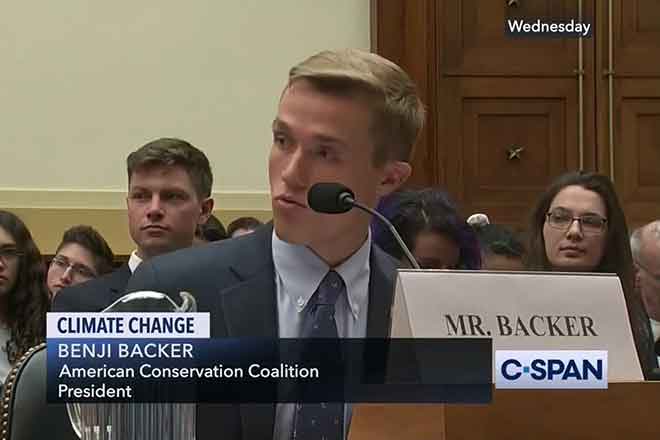 Benji Backer and other young Republicans started the American Conservation Coalition in 2017 to merge their conservative and conservation values. Courtesy CSPAN.

Even up until 2007-2008, the GOP supported many of the environmental regulations passed. Republicans such as George W. Bush, Newt Gingrich (former Republican Speaker of the House), Rudy Giuliani, Mitt Romney and John McCain all agreed verbally that protecting our planet from climate change was not a partisan issue. It wasn't until 2008 when Obama tried to pass policies to help reverse and mitigate climate change that special interests began to really intercede in U.S. environmental politics.

The American Conservation Coalition (ACC) is an advocacy group started by Benji Backer and other young Republicans in 2017. Backer said his drive to start this group after his freshman year of college came from his love of nature that was inspired by his family. "They were Audubon members, Nature Conservancy members. But they were conservative, and I grew up not thinking that the environment should be political at all," says Backer.

Another youth-led advocacy group that has emerged is the Young Conservatives for Carbon Dividends (YCCD), which supports carbon taxes to reduce greenhouse gases. Founder Kiera O'Brien grew up in Alaska and says that she and fellow Republicans have seen the impacts of climate change first-hand in the rapidly warming region.

As things worsen globally, many others, despite party affiliations, will likely come to similar realizations. The question is, can each and every one of us band together to make impactful change before it's too late?

South Dakota not as dry as last year but...

Here’s how government documents are...