The first trailer "Alita: Battle Angel" appeared over a year ago for a release in July, during the hot summer movie season. But apparently some edits needed to be made, and the film was pushed back to December, where it could take advantage of the Christmas season. Then got yanked away from that too, finally landing this past weekend, where there was a lot of money up for grabs with Valentine's Day and Presidents' Day falling only four days apart. It did claw its way to #1 at the box office despite not exactly fitting the bill of a date movie (there is a romance, but also a ton of violence). Still, there was an unmistakable air of studio nervousness surrounding the film, and if they didn't have confidence in their own movie, then why should we? I will say that if any of the delays caused the film to be as passable as it is, then the wait was worth it. 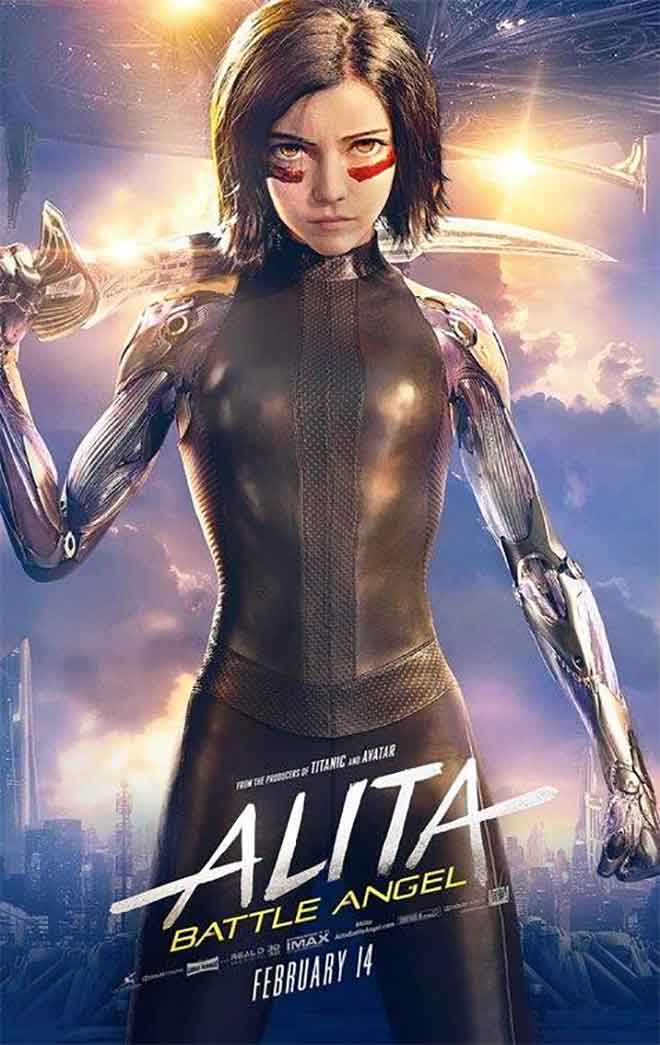 Rosa Salazar stars as Alita, a teenage cyborg living in what else, a dystopian future. Her human head was found in a scrapyard by Dr. Dyson Ido (Christoph Waltz), who took her home and gave her a robotic body that he had left over from his late daughter, much to the annoyance of his ex-wife Chiren (Jennifer Connelly). Ido wants Alita to have a "normal" life, but even without her mechanizations, she's too headstrong for that. She wants to become a star player in a popular sport called Motorball, an interest she shares with her best friend Hugo (Keean Johnson). The champion of Motorball gets to go live in the sky city of Zalem and leave all the chumps on Earth behind. It is also possible to earn one's way into Zalem through the discretion of Vector (Mahershala Ali), a Motorball honcho who deals in an illegal robotic limbs trade.

You could fill a whole movie with the Motorball business, but this movie also finds room for a bounty hunter storyline. Alita learn that Ido is a "Hunter Warrior" and she's drawn to that life as well. She makes quick enemies of Grewishka (Jackie Earle Haley), a hulking assassin who works for evil Zalem scientist Nova, who knows some key information about Alita's human life. Alita thinks that maybe she can collect enough bounties to buy her and Hugo's way into Zalem, but she'll have to do so at the expense of both criminals and fellow bounty hunters like cyborg Zapan (Ed Skrein, certainly in his element as a mostly-robot). And she also she wants to stop Grewishka and Nova just because they need stopping.

There is a lot of plot and world-building to unpack in this movie, and it's easy to get lost. The Motorball and Hunter Warrior storylines do intersect at various points, and on one hand it's nice that we don't have to memorize two distinct sets of characters, but on the other it's hard to keep track of who fits in where. And come to think of it, it's hard to figure out just why the bad guys hate Alita so much. She'd probably leave them alone if they'd just quit escalating things and trying to kill her.

The charm of "Alita: Battle Angel" lies in its ambitiousness. There's a complex world at work here, filled with complex characters with complex looks. Seriously, a lot of time went into designing the cyborgs on display, especially Alita herself, with her two robotic bodies and manga-inspired facial features (some people will find her enlarged eyes off-putting, I think they're pretty). Also complex are the action sequences, which contain violence not usually seen in a PG-13 movie (I assume the rating was saved because the violence is mostly happening to cyborgs), but are some of the most creative in recent memory. The story of "Alita: Battle Angel" is a mess, but there's enough good for me to give the film a mild recommendation.

"Alita: Battle Angel" is rated PG-13 for sequences of sci-fi action and violence, and for some language. Its running time is 122 minutes.