Annabelle, the creepy doll mascot of the "Conjuring" universe, is indeed coming home. Specifically, she is coming into the home of demonologists Ed and Lorraine Warren (Patrick Wilson and Vera Farmiga) in the early 70's. To be clear, the doll itself is not as evil or dangerous as its reputation implies, but it can be used and controlled by evil, dangerous demons. So if the doll starts popping up where it doesn't belong, a demon isn't far behind. A lot of scares in this movie involve the doll popping up where it doesn't belong. 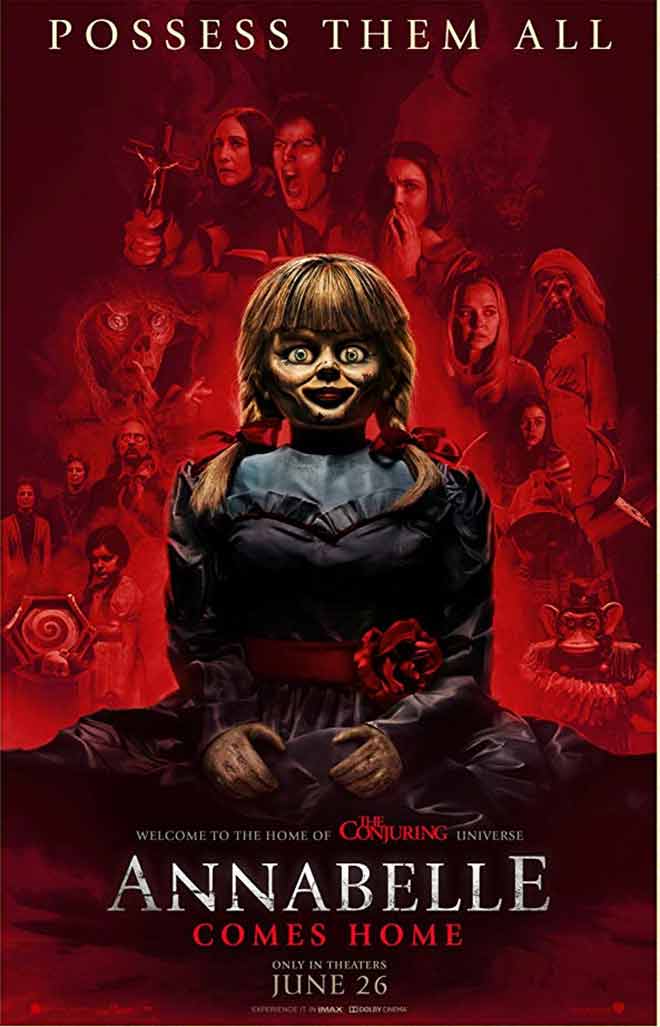 The Warrens leave town for the weekend (you didn't think actors the caliber of Wilson and Farmiga were going to stick around for the whole movie, did you?), leaving their daughter Judy (Mckenna Grace) in the care of babysitter Mary Ellen (Madison Iseman). Judy is having a hard time at school because the other kids tease her for having parents in a questionable profession. One person who isn't so quick to tease is Mary Ellen's friend Daniela (Katie Sarife). In fact, she's so far in the opposite direction that she invites herself over to the Warren house to learn more about what they do - and maybe get some closure on a personal matter in the process.

Daniela weasels her way into the room where the Warrens keep their demonic paraphernalia and then sets about disobeying both their rules about not touching anything and the audience's audible orders not to do anything stupid. She comes across a case made of demon-proof glass (because of course demon-proof glass is a thing in this world) that houses Annabelle. The case is labelled "Positively Do Not Open," but Daniela didn't trespass into this room just to not open a forbidden doll case. She opens it and unleashes all kinds of evil. Something bad happens to Daniela later in the film, and I found myself yelling "Good! This is overdue!"

The rest of the movie follows the three girls (and a neighbor with a crude nickname) as they get terrorized by the residents of the room. There's a specific demon attached to Annabelle, sure, but apparently releasing him from the case means that he can let all his otherworldly friends out to play. Most effective is The Ferryman, a serial killer who is considerate enough to put coins over his victims' eyes in accordance with Greek myth. Raising him somehow means raising all his victims, so get ready to see a lot of coins where eyeballs should be. Also good for a few scares is a wedding dress that drives anyone who wears it to murder, and may also be capable of murder by itself. A samurai suit of armor at least looks capable of harm. An organ-grinding monkey toy is exactly as scary as all organ-grinding monkey toys. A board game grows arms, but frankly isn't much of a threat without a complete body behind it. A hellhound is comprised of some of the worst CGI I've ever seen. It has the ability to turn into mist, which is the movie's excuse for why it doesn't look for a second like it's made of anything solid.

"Annabelle Comes Home" is a showcase for the leftovers of the Warren house, with the movie knowing it has no high-quality villains and trying to compensate with quantity. It wants you to think that you're getting, say, six horror movies for the price of one. But I'd say that on average each of its demons is about a twelfth as scary and substantial as they should be. So what you're getting is six twelfths of a horror movie, or half of one. See this movie and you'll come home disappointed.

"Annabelle Comes Home" is rated R for horror violence and terror. Its running time is 106 minutes.