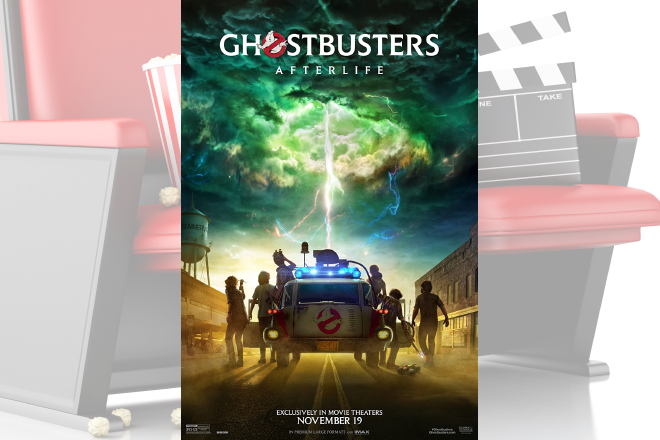 Director Jason Reitman is taking over the reins of his father Ivan's "Ghostbusters" franchise, and the results are a mixed bag. On one hand, the new film is truer to the spirit of the original "Ghostbusters" than the misguided 2016 reboot (stupid controversy over the casting aside). On the other, it's not that funny or exciting.

The film follows the family of Dr. Egon Spengler (the late Harold Ramis, depicted as alive at the beginning of the film). His daughter Callie (Carrie Coon) moves into his old farmhouse in middle-of-nowhere Oklahoma with her kids Trevor (Finn Wolfhard) and Phoebe (Mckenna Grace). Trevor is a sarcastic gearhead, in other words a typical teenager, with an uninteresting subplot where he tries to woo a local waitress (Celeste O'Connor, even more devoid of personality).

More interesting is Phoebe, who goes to school strictly for fun. She takes up the hobby of trying to find out why the small town has so many earthquakes, aided by her friend Podcast (Logan Kim, whose personality is annoying, but at least he has one) and seismologist teacher Mr. Grooberson (Paul Rudd). Gradually she discovers that ghosts are responsible, and that her grandfather was trying to save the world from them, which is why he had a falling out with the other Ghostbusters and was estranged from his family.

I can't say much for the humor in the movie. There's a running gag of Phoebe telling terrible jokes, but they aren't much worse than what the movie tries to pass off as legitimate jokes, especially when Podcast is involved. It's so strange that Reitman, who brought us two of the funniest movies of the 2000's in "Thank You for Smoking" and "Juno," wouldn't have more in the tank than the hacky "nothing ever happens in this town" bits that we get here.

Much has been written of the incessant fan service in the film, and yeah, it's pretty painful. Almost every corner of the film has a reference to "Ghostbusters" or some 80's movie that Reitman loves. I was particularly unimpressed with the return of the Stay-Puft Marshmallow Man, or Men in this case, since it's a bunch of little ones for some reason. They're constantly distracted from their mission, and why would you choose them for a mission anyway? There was a reason to incorporate an enormous Marshmallow Man into the original film - Ray was trying to think of the most harmless harbinger of doom possible - but there's no reason to use them here except that fans are supposed to cheer for them.

"Ghostbusters: Afterlife" isn't good at humor, fan service, or straight action (I know I haven't mentioned that yet, but it's all CGI garbage). So, what does it do right? In a word, heart. Grace, Coon, and Rudd (congratulations to Rudd on being named "Sexiest Man Alive," by the way) are all effortlessly charming, and you want to chuckle warmly at them even though what they're saying isn't that funny. I was drawn into the Spengler family dynamic, as the various members struggle to understand and forgive Egon. And the movie has a tremendous amount of love for Harold Ramis. At first, I hated that his likeness was being incorporated into the story, the same way I've detested the way the "Fast and Furious" movies insist on keeping Paul Walker's character alive, but it made sense by the end. It's not a fun journey, but the ending of the film, inevitable cameos, and all, redeems a lot of what came before it.

"Ghostbusters: Afterlife" is rated PG-13 for supernatural action and some suggestive references. Its running time is 124 minutes.