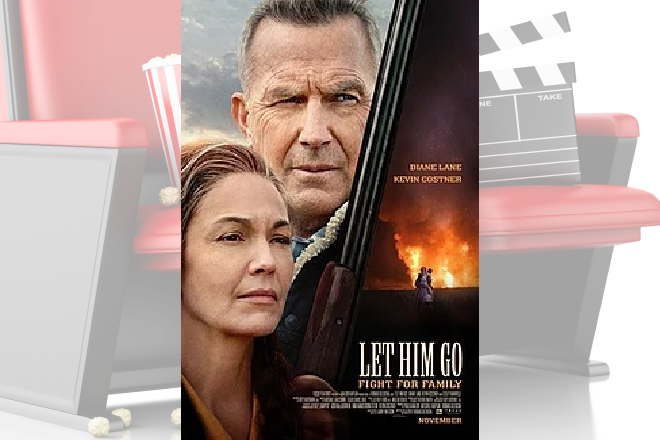 For once, I have something nice to say about the sparse schedule of theatrical releases while studios push back their surefire hits until they can play to full houses. In a field of blockbusters, the quiet adult drama "Let Him Go" almost surely would have been lost at the box office. But with the release calendar cleared save for one meager release per week, this movie can comfortably open at #1. Granted, it's a pretty pathetic #1 with many theaters closed or at reduced capacity, but there's room for this movie to grow through word of mouth, which it decidedly deserves.

Kevin Costner and Diane Lane star as George and Margaret Blackledge, respectively. He's a former sheriff in small-town Montana, and she's so wily that I got the impression she had unofficially helped him crack some cases. At the beginning of the film, the couple's adult son James (Ryan Bruce) dies, leaving his wife Lorna (Kayli Carter) a widow and his son Jimmy (twins Bram and Otto Hornung) fatherless. Three years go by and the still-devastated George and Margaret have to watch Lorna get married to the sketchy Donnie Weboy (Will Britain). Margaret doesn't trust Donnie, and her suspicions are confirmed when she witnesses him hitting both Lorna and Jimmy. She goes to the family's apartment to offer support, only to find that Donnie has fled Montana with Lorna and Jimmy in tow.

Margaret vaguely remembers Donnie mentioning that he has family in North Dakota, and sets out on a quest to get Jimmy back. She drags George along, and he makes some headway in the investigation using old police connections, but he also points out that she doesn't really have a plan for getting custody of Jimmy. What if Lorna and/or Donnie don't want to give him up? Does Margaret truly know what's best for Jimmy, or is her judgement being clouded by the loss of her own son?

Even if Margaret's motives are a bit selfish, it is soon clear that the Weboy homestead in North Dakota is no place for Jimmy. Or Lorna. Or anybody in their right mind. Weboy family matriarch Blanche (Lesley Manville) is the kind of control freak that likes to have everybody under her thumb - including and especially her family. George and Margaret aren't going to be taking Jimmy without having to contend with at least five members of the Weboy clan. And these people know their way around a hatchet.

The film excels in many departments, including lighting, score, and cinematography (if you like gorgeous Midwest scenery, this is the movie for you), but it's the performances that are most memorable. Costner displays the expected engaging stoicism. Manville is bouncing-off-the-walls cuckoo. Lane is in a class by herself, bringing the character's particular brand of determination to light with every word. I wouldn't be surprised if she gets an Oscar nomination for this performance, and there must have been at least ten scenes I could see being used as the highlight clip shown during the ceremony.

Downsides to the film include a go-nowhere storyline with a hermit (Booboo Stewart), conspicuous underdevelopment of two members of the Weboy family, monotonous action during the climactic sequence, and a general sense that this story has been cut down from a longer one with more detail (it is indeed based on a book). I wanted to spend even more time with these characters, and was ready to suggest that this property become a franchise, but that isn't going to happen unless it takes the prequel route (which I wouldn't mind, but isn't likely). Still, "Let Him Go" is one of the best surprises of the year. See it while you can, though I hope it has a nice long run in theaters and success at the box office.

"Let Him Go" is playing in theaters, check local listings. The film is rated R for violence. Its running time is 114 minutes.