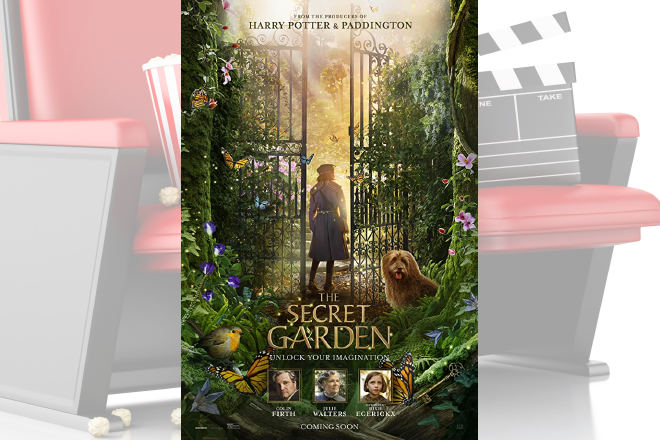 It's been a while since I reviewed a kids' movie. "Scoob!" was the last one, all the way back in May. There's a pleasantness to these movies that I missed. Obviously, kids' movies can get into dark subject matter the same way movies for grown-ups can be light, and indeed this movie is heavy on characters dealing with loss and estrangement. But this movie, like most kids' movies, is quick to turn those storm clouds into a rainbow. And it's in a way the whole family can enjoy, with plenty of bright colors and whimsy, but no lame physical humor or obnoxious pop music.

The movie, based on a classic novel, follows 10-year-old Mary Lennox (Dixie Egerickx) as she loses her parents in India and goes to live with her mysterious uncle Archibald Craven (Colin Firth) at his huge estate in England. Mary is miserable and spoiled, unable to dress herself and refusing to express emotion. Archibald is a miserable recluse who spends his days mourning the loss of his wife ten years earlier. Archibald has a son named Colin (Edan Hayhurst) who is also miserable and spoiled, confined to a bed with a spinal condition of dubious legitimacy. What could possibly make these characters snap out of their funk? A dog, of course. Okay, a dog that leads them to the secret garden.

Colin's mother started the secret garden, but no one has been in it for ten years because Colin has been bedridden and Archibald is too mopey to bother with it. Mary and Dickon (Amir Wilson), the brother of chipper servant girl Martha (Isis Davis), find the garden and decide they need to show it to Colin because it possibly has magical rejuvenating powers that could heal his spine. At the very least Colin should see it because he's missing out on a beautiful garden that his mother undoubtedly felt was his birthright.

It's the garden itself that sells the movie. Bringing this setting to life requires excellent cinematography, and this movie nails it. Vibrant reds, blues, yellows, and pinks are featured, and even a dying brown during a sad scene is at least a memorably ugly color. But your takeaway will be the greens. Who knew green came in so many lush, perfect shades? It's also worth mentioning that the garden is sprawling, as its magic properties apparently include the ability to be larger than the dimensions of its walls. This is at least the third movie I've seen this year to be disorienting like this, but this is the first time I've enjoyed it.

A few minor quibbles: it's sometimes hard to understand the dialogue with the actors' accents, especially from Julie Walters as the estate's head housekeeper. I found it hard to buy Egerickx and Hayhurst as initially-unpleasant children, which I guess is a testament to the young actors' natural likeability. Perhaps my biggest gripe is that I wasn't crazy about the writing of the Dickon character. The screenplay relies on him too much for strictly functional purposes, like when other characters need help from someone handy with tools or familiar with the estate. There's one scene where Martha tells Mary that Dickon will lose much more than she will if they both get in trouble together, and Mary (and the movie) just blows off the class discrepancy, which is also a racial discrepancy, instead of considering that Dickon has his own set of challenges.

A few rough edges aside, this is a delightful take on "The Secret Garden." I wish I'd been able to catch the film's outstanding visuals on the big screen, but then again a theatrical release might have seen it swallowed up by more marketable properties. Speaking of having to watch the film at home, there's a timely message here about finding treasures wherever you live. Kids can certainly take that message to heart, and some adults can probably use it too.

"The Secret Garden" is available On Demand through steaming services and likely through your local cable provider. The film is rated PG for thematic elements and some mild peril. Its running time is 99 minutes.