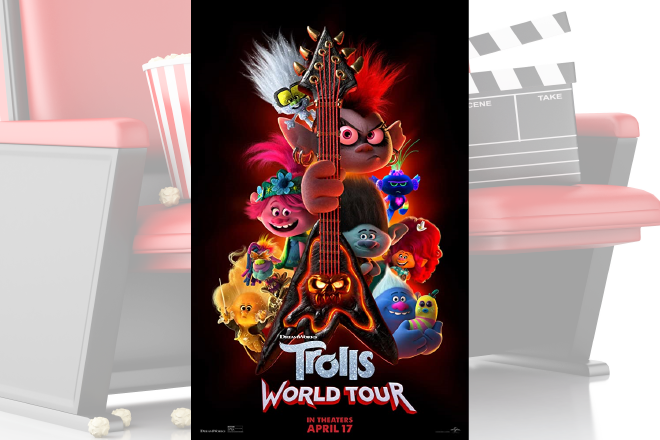 In an era where theaters are closed and studios are pushing back their hottest movies until next year, Universal has made the bold decision to release its animated would-be blockbuster "Trolls World Tour" straight to On Demand so it can capitalize on an audience with dwindling entertainment options. At $19.95 per order (though each order allows multiple people to watch i.e. families gathered around one big TV), the studio stands to make a pretty penny off of being the newest game in town. I applaud Universal for choosing to reach and entertain customers at a time when movies are officially considered nonessential, but unofficially have an essential role to play in helping us maintain our sanity. That said, I don't necessarily applaud the film itself.

Following the events of 2016's "Trolls," Queen Poppy (Anna Kendrick) lovingly rules over the Pop Trolls with her best friend Branch (Justin Timberlake), who wants to be more than friends. But the easy, everything-is-perfect existence is threatened by Queen Barb (Rachel Bloom) of the Rock Trolls (as in Rock 'n Roll, not the types of Rock Trolls that blemished "Frozen"), who wants to steal the magic guitar strings that are the essence of music for all the Troll Kingdoms. Poppy doesn't want a war, so she goes on a journey to broker a peace that would allow all the Troll Kingdoms to live harmoniously under Pop music, which no doubt everybody loves and will unite everybody in one big party.

The journey takes Poppy, Branch, and their friends Biggie (James Corden) and Cooper (Ron Funches) through the other Troll Kingdoms like Classical, Country, Techno, and Funk. Certain subgenres are represented by bounty hunters hired by Barb, including Smooth Jazz, Yodeling, and...K-Pop? You'd think K-Pop would fit in with the Pop Kingdom since "Pop" is right there in the name, but we get a Red Velvet cameo out of the disparity, so I can't be too mad. Other industry cameos include Kelly Clarkson on behalf of Country, George Clinton and Mary J. Blige on behalf of Funk, J Balvin on behalf of Reggaeton, and Ozzy Osbourne on behalf of Smooth Jazz. Wait, sorry, my notes are wrong, I mean on behalf of Rock.

Along the way Poppy has to learn the hard lesson that not everybody likes Pop music, and some even like music that she doesn't like. But it's okay, we should celebrate our differences, dance to our own beat, etc. It's a good thing the movie goes in that direction, because I was feeling increasingly annoyed with being expected to root for Poppy against Queen Barb, who lovingly dotes over her aging father, has the funniest lines and voice performance, and depending on your taste, the best songs on the soundtrack. The movie spends way too much time on tiresome in-fighting between Poppy and Branch (egged on by a too-helpful-to-be-true cowboy voiced by Sam Rockwell) and not enough time on Barb and her "World Tour" of capturing the other kingdoms' guitar strings, which should have been the meat of the movie.

"Trolls World Tour" has the look, sound, and cast of a big screen release, but the half-hearted script of a movie that goes straight to On Demand. I often found myself doing that "move along" hand gesture in anticipation of the story beats ("Get to the obstacle... get to the twist... get to hitting us over the head with your unoriginal lesson"), with the jokes, songs, and visuals doing nothing to prevent me from being bored. Maybe this is a movie that should have waited for the big screen, because its most prominent feature is its colorful visual style, which isn't effective on a mere TV. The best thing I can say about this movie is that it's better than nothing in an era where "nothing" happens to be very powerful.

"Trolls World Tour" is rated PG for some mild rude humor. Its running time is 90 minutes.

Contact Bob Garver at rrg251@nyu.edu. Visit www.bobatthemovies.com for a chance to suggest movies for upcoming columns.