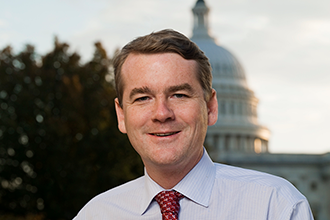 In 1905, President Theodore Roosevelt came to Colorado for a three-week bear hunting trip. Perhaps inspired by Colorado's beauty, that same year, he created the U.S. Forest Service to manage lands for public use. In 1906, he signed the Antiquities Act, which has since led to the designation of over 100 national monuments.  These were some of the first and most important steps to recognize our national treasures such as our mountains, rivers, forests, and prairies.

Roosevelt's vision--that the people should hold public lands--has inspired our state's great legacy: more than a third of Colorado is now held as public lands.

These lands form the backdrop of our daily lives. Pikes Peak, Longs Peak, and the San Juan Mountains comprise the rugged heart of our terrain. Mesa Verde, Rocky Mountain, Great Sand Dunes, and the Black Canyon of the Gunnison are prized national parks. Browns Park National Wildlife Refuge, Browns Canyon National Monument, and the Hermosa Creek Wilderness are among our favorite places to hike, stalk elk, cast for trout, or simply enjoy nature with our families.

This vision has also been a major economic driver in our state. It drives our outdoor recreation economy from ski areas to whitewater rafting.

It also protects fish and wildlife habitat, and provides clean water for drinking and irrigation.

According to the Colorado Outdoor Recreation Industry Office, Colorado welcomes more than 60 million tourists per year. Those visitors spend $17 billion annually, and support 313,000 outdoor recreation jobs in our state. Our national forests, national parks and Bureau of Land Management lands are why people want to live, invest, and raise a family here.

We know that the management of public lands is not always perfect. Yet even Coloradans who disagree on how best to run them agree that management agencies need more funding to protect them properly.

Unfortunately, groups outside of Colorado are working to erode the public estate. They are pushing legislation at both the federal and state levels to transfer public lands to state ownership. The economic reality is, once saddled with management costs, states wouldn't be able to afford to manage public lands and would transfer those lands into private ownership--likely closing them to the public forever.

Dangerous attempts to sell off our public lands are underway in Congress, as well. In January, House members voted to devalue public lands, treating them as if they have no financial worth to the U.S. government or the American people. A separate bill introduced in the House would have mandated the sale of 3 million acres of public lands, including around 90,000 acres in Colorado. A massive outcry from sportsmen, outdoor retailers, and other advocates led to that bill's withdrawal.

These interests claim to be rooted in "Western values," but as Westerners, we have consistently demonstrated that we love our public lands and want to keep them in public hands. We appreciate that protecting our watersheds, safeguarding wildlife habitat, and conserving public lands is not only important for our health and environment, but also crucial to our state's thriving outdoor economy.

That's why bills like the Thompson Divide Withdrawal and Protection Act introduced this week are so important. They serve as models for us to find common ground to protect the landscapes we value so deeply. Our commitment to carry on our public lands legacy is one of the most important promises we can make to our children and grandchildren.

Today, we benefit from the conservation leadership of President Roosevelt and the decisions he made more than 100 years ago. It is now our turn to secure public lands for the next generation, so they too can explore our favorite hiking trails, secret hunting spots, or hidden fishing holes. All of these places are part of the uniquely American legacy of open public lands - a legacy that we must always defend and never take for granted.

John Gale is the Conservation Director for Backcountry Hunters & Anglers.