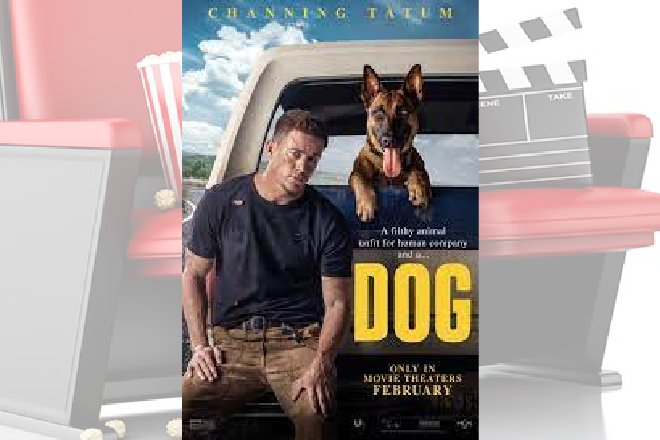 It is said that actors should never work with children or animals, or they'll be upstaged. This is most definitely true of star/co-director Channing Tatum in "Dog." But the good news is that the dog is so great that there's plenty of room for Tatum to shine under his canine co-star. There's no shame in Tatum being #2 to this dog, just like there's no shame in "Dog" being #2 to "Uncharted" at the domestic box office for the second weekend in a row. That movie had over $100 million more in its budget, plus a ton of other advantages. Though if I had my way, "Dog" would be the better performer of the two.

Tatum stars (well, he's the human star) as Briggs, a broken-down former Army Ranger. He suffers from PTSD, he never sees his daughter, he works a dead-end job in fast food, and he can't even bother to get his military ID updated. He's one recommendation away from a job that pays $200K a year, but he's not going to get that recommendation given his array of injuries and mess of a personal life. On top of everything, a fellow Ranger named Rodriguez just died under particularly saddening circumstances.

Briggs is made an offer: transport Rodriguez's partner Lulu, a Belgian Malinois, from Washington to the funeral in Arizona and he'll get the recommendation he needs. The challenge is that Lulu also has PTSD and is super-needy and aggressive. She's so out of control that immediately following the funeral Briggs is to take her to another base to have her put to sleep. He isn't crazy about either part of the assignment, but the reward is too great to pass up.

And so the pathetic mangy mess of a creature goes on a lengthy road trip with Lulu in tow. Briggs is so irresponsible that his first stop is a gun range - with a dog with PTSD that can clearly hear gunfire from the car. Lulu destroys her cage and chews up much of the vehicle. Briggs is shocked by this behavior, but he should only be shocked that he was issued such a lousy cage by people who know the animal's capabilities.

Other adventures include a kidnapping by a pair of hippies (Kevin Nash and Jane Adams), a disastrous attempt to pick up women in Portland, an unsuccessful visit with Briggs' daughter, a successful visit with Lulu's brother, a stormy night spent watching "Grey's Anatomy" in a tool shed, and a problematic attempt to score a free hotel room in San Francisco by pretending to be a blind man and his service animal. The pair probably could have gotten special treatment just by both being Army veterans, but Briggs must be greedy. In the aftermath of this scene, I couldn't help but wonder if someone could take Lulu to the funeral while Briggs deservedly rots in jail for fraud (though maybe not for a hate crime - long story), but this is a movie about dual redemption, so man and beast will either make it to the funeral together or not at all.

I'm no dog person, and I strongly disapprove of some of Briggs' choices throughout the journey, but I was surprised by how much I liked this movie overall. The tone varies wildly, but that's because the characters are so wild (come would say "reckless") that the subject matter can change in an instant. As a result, the movie has both light and heavy scenes that it pulls off very well without forced transitions. I mentioned earlier that neither Tatum nor the film's box office should be ashamed of being #2. I believe I'll give "Dog" the #2 letter grade.

"Dog" is rated PG-13 for language, thematic elements, drug content, and some suggestive material. Its running time is 101 minutes.

Opinion: Celebrate our independence by...